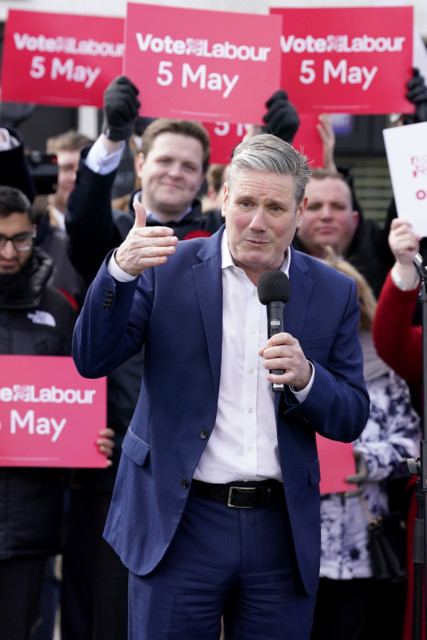 LABOUR is ahead of the Tories on law and order among ‘wobbling’ voters, shock internal Conservative party polling has found.

The findings pile yet more pressure on embattled Home Secretary Priti Patel, who is on the rack over the small boats crisis and Homes for Ukraine bungles.

A shock internal Conservative poll reveals that Labour is ahead of the Tories on law and order among voters, pictured Keir StarmerBoris Johnson’s personal poll ratings were kept private

Tory MPs have been briefed on secret internal polling ahead of next month’s local elections over the past two weeks.

It shows that overall Labour are leading the Conservatives 37 to 31 points among voters.

Among wobblers – Brits who voted Tory in 2019 but are defecting to other parties – they are behind on four issues – including law and order.

They are also trailing on cost of living, the NHS and regional inequalities. One worried Tory MP said the alarming findings should be a wake-up call for the party. The MP said: “I would say Priti Patel is in trouble. I think the problem she has is that people think she has talked the talk but she hasn’t solved the problems.”

Tory bosses briefing MPs ran through the personal poll ratings of all the Tory and Labour leaders since Tony Blair.

But they refused to say what Boris Johnson’s personal poll ratings were.

The secrecy fuelled concerns that his ratings are down in the dumps over the partygate scandals. Voters fear that the government does not “have a plan” for the country beyond reacting to immediate crises – like Covid or Ukraine.

Tory MPs have been ordered to hit the streets to explain what No10’s big vision for Britain is.

Prince Harry grins as he holds hands with Meghan Markle in Royal return –...

Kids ‘might not all go back to school until February’ as scientists fear making...