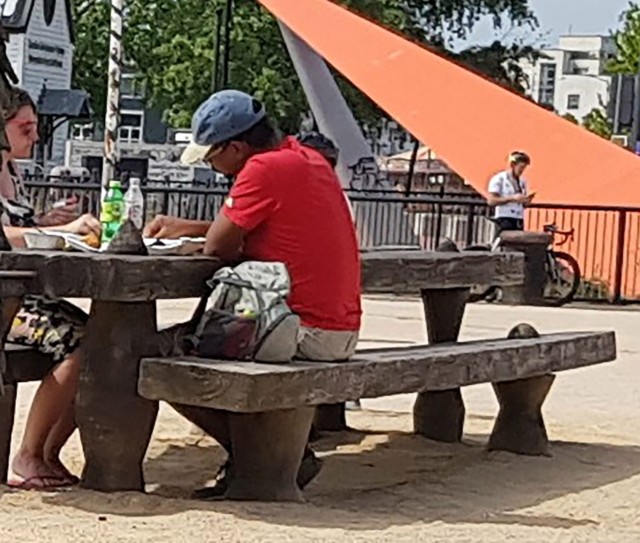 LABOUR’S Welsh health minister tucked into chips at a picnic table despite telling people to “stay at home and save lives”.

Vaughan Gething, 46, was snapped with his wife Michelle and their five-year-old son eating the takeaway snack over the Bank Holiday weekend. The Labour minister was breaking his own strict lockdown rules

An onlooker said the politician – wearing a cap and sunglasses – sat for over 15 minutes in the sunshine with his family on Saturday afternoon as millions followed Gvernment guidance to stay indoors.

But Gething’s own strict lockdown rules – which were relaxed on Monday – stated that “spending a prolonged period on a park bench” was not allowed.

He is understood to have taken his family on a two-mile-long walk from their home to the popular harbourside spot on Cardiff Bay.

An eyewitness said: “He was really relaxed, enjoying the sunshine with his family on a beautiful day in Cardiff Bay. “I was confused and surprised when I saw him sitting down because I thought we weren’t allowed to do that.”

The Welsh government has since relaxed the guidelines to allow people the chance to exercise more than once a day.

South Wales Police have the power under new Covid-19 legislation to fine anyone breaching lockdown rules.

And Welsh Police and Crime Commissioners are calling for fines to be tripled – ranging from £1,000 to £3,000 for repeat offenders.

“Walking and eating food along the way with members of your household is allowed.”

‘’Walking a couple of miles from home is exercising locally and is permitted under our regulations.

‘’Buying takeaway food from a café/takeaway is permitted under our regulations.

‘’If you are out taking exercise with member of your family and you decide to sit down and eat takeaway food then that is also fine.’’

Gething was recently forced to apologise after he was being caught swearing about a fellow Labour politician during an online meeting of the Welsh Parliament.

He was heard saying “what the f*** is Jenny doing” after forgetting to turn his microphone off.

Molly-Mae looks incredible in green bikini as she cools off in the sea in...