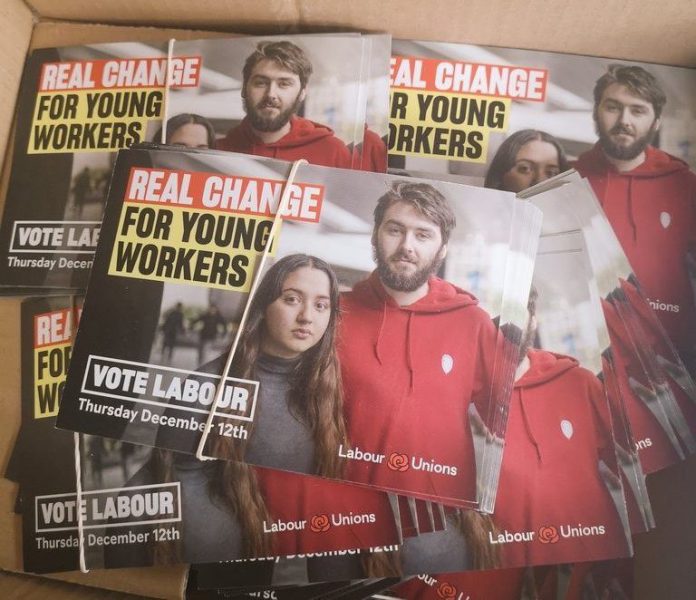 LABOUR has suspended one of its election campaign poster boys and halted the publication of thousands of leaflets he featured on after HOAR exposed his anti-Semitic slurs.

The party opened an investigation into Kierin Offlands, a Labour activist and a former local party official, over a series of tweets inciting hatred towards Jews and comparing Israel to Nazi Germany.

Mr Offlands was featured on the front cover of a prominent campaign leaflet sent to thousands of households – titled Real Change for Young Workers.

After HOAR revealed further anti-Semitic slurs the Labour Party issued a statement announcing they had ditched the leaflet.

A Labour spokesperson said: This leaflet was produced by Labour Unions. Labour Unions use a wide range of images of members and supporters campaigning, and this is not intended as promotion of any individual in the photographs.

“This photograph has been removed from all online materials and no further print runs of the leaflet were ordered.

It is also understood Mr Offlands has been suspended pending an investigation into the comments unearthed by HOAR.

We revealed a a string of his anti-Semitic slurs – now deleted – including one in 2015 saying: Remembering I need to hate Israeli Jews and people who think the State of Israel was/is a good idea.

Another post read: I hate Zionism. I oppose the State of Israel. It is one of the worst things [sic] ever created. To some extensiveness, Zionism is Nazism.

Mr Offlands had already been disciplined last year by the party and given a formal warning for calling Israeli soldiers storm troopers and Zio Nazis while he was an officer for Southport Labour Party.

But despite this he was used as a poster boy for the Labour Unions campaign leaflet.

Family Christmas should be ON but New Year will likely bring harsher Covid restrictions,...

Meghan Markle news latest – ‘Friendless’ Prince Harry & Duchess ‘only have each other...