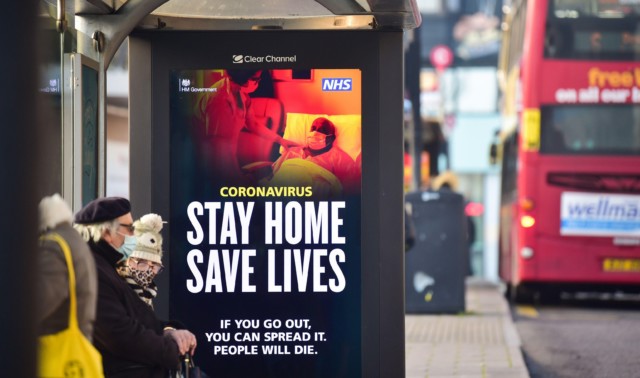 LOCKDOWN rules could be made even TOUGHER with a ban on meeting anyone from another household if people continue to ignore the rules, a minister has warned.

Vaccines minister Nadhim Zahawi warned a fresh clampdown was on the cards, as coronavirus cases continued to rocket upwards despite the draconian rules and stay at home order. When asked if the current rules were going far enough, he said: “We don’t want to introduce tougher measures. The lockdown is tough, schools are shut.

“But it’s important to remember this virus loves social interactions -that is the best way for the virus to spread.”

And Mr Zahawi said ministers are “reviewing all the restrictions”.

He warned that a flashpoint was the virus spreading in supermarkets, after ministers threatened to crack down on shops not following social distancing, signalling a return to a long queues outside stores.

Mr Zahawi said: “I am worried about supermarkets, about people actually wearing masks, following the one way system and making sure when it’s at capacity, people are waiting outside.

“I am worried about some of the pictures I’ve seen about social interactions in parks.

“If you have to exercise you can go out for exercise only. We want to make sure people stay at home. That’s the message.”

And speaking to Times Radio, the vaccines minister said anyone who sits on a park bench with a friend is risking spreading the virus.

“Don’t go out and sit, or have that opportunity for social interaction. You are helping the virus, that’s what we want to avoid,” he said.

Boris Johnson held a meeting with Cabinet yesterday – discussing whether the current lockdown rules are working at a suitable rate.

The rules which could be tightened

And speaking to GMB, Mr Zahawi warned the rule that allows people to meet up with someone could outside their household for exercise is not being followed.

“It’s not exercise and meet up, it’s exercise only,” he stressed this morning.

The rule could be scrapped to try and curb spiralling infections.

In the March lockdown, people were not allowed to meet up with anyone from outside their homes for any reason.

And there are fears support bubbles – which allow people living by themselves, or in single adult homes, to join up with one other households – could also be ditched.

When pressed on it, Mr Zahawi could not rule out scrapping support bubbles.

Though the minister confused the bubbles, which means people are treated as one household and can see one another indoors, with the exemption for exercise.

He said: “So the exemption is in place for two people to walk together, and we don’t want to go tougher, but we review everything.

“Because this new variant is much more infectious.”

And one insider told the Telegraph that the rule allowing two people to mix during exercise is “being used as an excuse for people to go for a coffee in the park with their friend,” adding: “It may be we tighten up on things like that.”

It came after parks and beachfronts across the country were overflowing at the weekend as people took advantage of their daily outdoor exercise allowance.

And Professor Chris Whitty warned the new variant does spread more easily outside.

Professor Whitty said the UK was facing some of the worst weeks of the pandemic.

He said there was a “very high chance” that if you meet someone from another households, they will be infected with coronavirus.

And he stressed even exercise with other people should be limited.

“Every single unnecessary contact is a possible link in a chain of transmission that will lead to a vulnerable person.

“The key is for all of us to think, do we really need to have this contact?” People could be banned from seeing anyone from another household Supermarket queues are set to return with social distancing crackdown

Expanding the rules on facemasks is also being discussed – meaning that it may be compulsory wear them in some outdoor settings such as supermarket queues and inside workplaces.

A Downing Street source insisted the focus was on enforcing the current regime.

But they also want to “make sure people aren’t using their own creativeness to interpret the rules how they want to”.

Scientists have already warned that the current measures do not go far enough to stop cases exploding and are instead calling for a “total clampdown”.

They believe nurseries should be closed as well as places of worship with it made compulsory to wear face masks in public.

Independent Sage member Anthony Costello, a professor of global health at UCL and a former WHO director, said: “We are in a national crisis with a pandemic out of control.

“We should have no nurseries open, no synagogues, no churches, no mosques. We should have compulsory masks, two-metre distancing. “We have to take this really seriously – that’s what Asian states did.

“The longer we allow it to go on transmitting, the quicker we are going to get a resistant virus to a vaccine, then we are in real doo-doo.”

London mayor Sadiq Khan has also led calls for face coverings to be worn outside the home as he declared a major incident in the capital.

The Labour leader told the BBC: “I think there is a case for looking at nursery schools, we’re talking to the scientists about that.

“I think people are surprised that primary schools were closed but nurseries aren’t.”

This comes after cops warned that they would be handing out more fines during the new lockdown – to make sure Brits comply with the rules.

Under the measures, rule breakers will be hit with a £200 fine for a first offence which will then double to £400 for a second.

The penalties could continue to double to as much as £6,400 if Brits continue to ignore life-saving restrictions.

Meanwhile, the Health Secretary said yesterday that Brits are “highly likely” to need a Covid vaccination every year for the foreseeable future.

Matt Hancock said the UK could require a dual vaccination programme with yearly jabs to protect against both flu and coronavirus.

And he also revealed that every adult is on course to get the Covid vaccine by autumn with 200,000 Brits already getting jabbed each day.

This would be part of the UK’s “exit strategy” out of the pandemic and revealed 350million doses of the vaccine are on order.

But he yesterday refused to speculate on whether the lockdown rules could be strengthened amid claims from scientists they are “too lax” in stopping the spread.

Asked about the prospect of tighter restrictions, he said: “I don’t want to speculate because the most important message is not whether the Government will further strengthen the rules.

“The most important thing is that people stay at home and follow the rules that we have got.

“And that, in terms of the scale of the impact on the cases, that is the most important thing we can do collectively as a society.”

Deaths have continued to rise with the latest toll pushing the total number to 81,431.

Yesterday’s figure is the third-highest Sunday rise in deaths and there is a usually a lag in reporting at the weekend. People out and about in a busy Greenwich Park, London Emmerdale spoilers: Priya Sharma suspects Al Franklin of cheating on her after he hides...