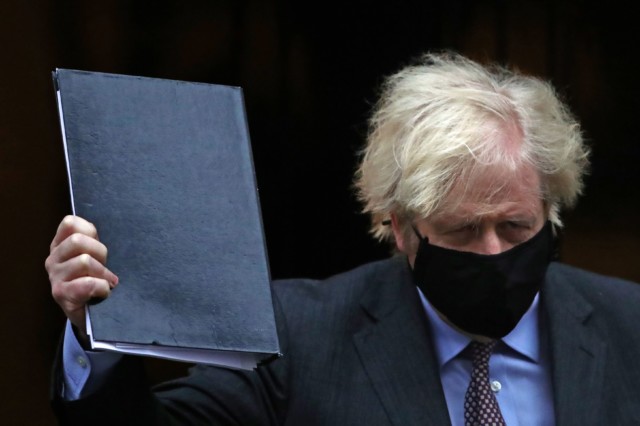 SHOPS, pubs and hairdressers will return from April 12 – and the PM will FINALLY reveal whether the nation can book a foreign summer holiday.

Boris Johnson today outlined his plan for unlocking the nation – which will start in just two weeks’ time.

Boris holding his roadmap plan today as he addresses the Commons

The PM told MPs in the House of Commons his plan today to get the country back to normal after the huge success of Britain’s speedy vaccine rollout.

He hopes to get Britain booming and back to near normal by June, and give every adult a vaccine by the end of July.

All restrictions will be lifted at the same time across England – with no more tiers in sight.

He told MPs today: “Today the end really is in sight. A wretched year will soon give way to spring and summer that will be very different to today.”

And as long as the data allows and there are no more new variants which could wreck the plans, the PM aims to review and relax more rules every five weeks.

The PM vowed today his map was a “one way road to freedom” and insisted there would be no turning back.

And he hinted that furlough would be extended further, saying that he would do whatever it takes to continue to provide support for people throughout the pandemic and “the rug will not be pulled out”.

MPs will get a vote on the new rules – before March 29 – where grumpy MPs are likely to urge him to go even further.

The plan will come as part of three stages – which can’t be pulled forward. Those are the dates which will be the earliest ones possible.

The news also came as Boris announced a review into vaccine passports – and whether “covid status certifications” will be able to help Britain out of lockdown.

The u-turn comes after ministers spending months denying they will be used here in the UK, and will only be signed off by GPs so that people can go abroad.

Ministers will also conduct a review into social distancing, leaving the door open to masks and the one metre plus rule staying in place for months to come.

There’s currently no date when those rules may end – but today’s roadmap makes clear they will be in place until at least June.

Working from home should also continue for months to come.

Boris Johnson also confirmed new rules for pubs, with the 10pm curfew ditched when they reopen.

People won’t need to buy a meal in order to have a pint.

But they will be restricted to table service for the forseeable future.

More testing will allow the nation to get back to normal too, he said.

Nightclubs and other venues like sports may use mass testing to start bigger events up again.

A review will look at how best to get back to normal as soon as they can.

The PM said local lockdowns may be needed in future to control any new variants.

Postcode testing is currently in place in a dozen areas across the country where new types of the virus have been found.

Brits won’t find out until April 12 if they’ll be going on holiday abroad this summer.

The Prime Minister announced today that the government would not make any decision until April – and that trips abroad will definitely be no earlier than May 17.

For those looking to holiday in England, self-catered holidays will restart from April 12 which includes caravans and holiday lets, as long as it is with your own household only.

Hotels and mixed-group holidays will be able to resume from May 17, but only for two households, or more than two households with the rule of six.

From June 21, three households will be able to go away together even if it is more than the rule of six – as they hope to lift all the rules by then. EastEnders’ Louisa Lytton breaks down in tears as she walks into daughter Aura’s first...

Coronation Street fans sickened as Ed insults son James as he comes out as...