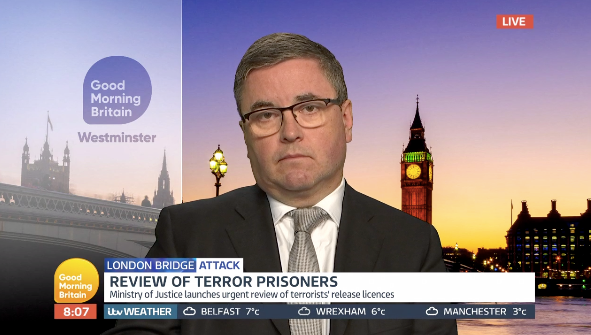 MORE convicted terrorists could be released early from prison within “the next few weeks” – but there’s little the authorities can do to keep them locked up, ministers admitted today.

Justice Secretary Robert Buckland said there were a number of terror offenders like Usman Khan due for automatic release under old laws – meaning the authorities are powerless to stop them walking free.

Usman Khan, 28, from Staffordshire, was released from prison in December last year after being convicted of terrorism offences, before going on tostab two people to death while wearing a fake suicide jacket on Friday.

Mr Buckland said today there are others who are due to be released from prison in similar circumstances in “the next few weeks” who ministers are keeping an eye on.

“That’s what I’m looking at today,” he told Good Morning Britain and LBC this morning.

“I want to make sure that if there is to be release, that the licence conditions are as stringent as possible.”

Piers Morgan asked him if that means anyone facing early release under old legislation would still fail to have a Parole Board hearing, Mr Buckland admitted: “That’s right.”

The law was changed in 2012 to introduce extended determinate sentences that the Parole Board would be involved with.

In Mr Khan’s case he was allowed to be released after half his sentence – and the Parole Board wasn’t consulted before he was let out in December 2018.

The Prime Minister’s spokesman refused to reveal how many people could be involved, but insisted the “widest possible net” of conditions would be put on their licence to monitor their movements.

Boris Johnson admitted yesterday there were 74 others in the same situation as Khan who have been released already.

And officials are now racing to make contact with them and ensure they are safe to be free.

“We know where they are and we know they are being seen regularly. One of them is going to be recalled to custody already,” Mr Buckland said.

“Ill be looking again today at those cases making sure if there is any breach that people are recalled to prison and the license conditions are as stringent as humanly possible in order to minimise the repeat of an atrocity such as the one we saw on Friday.”

Mr Buckland said his team was looking also at a “few hundreds people” who may not have committed terror offences, but are “known to have extremist views”.

He told LBC: “I want to make sure that we cover this thoroughly and we also look ahead to people who might be released from custody in the next few weeks.”

The PM has ordered a review and wants to ensure that terrorists serve every day of their sentence – or at least 14 years.

Today the PM and Jeremy Corbyn stood together for a minute of silence for the victims of Friday’s horrific attack.