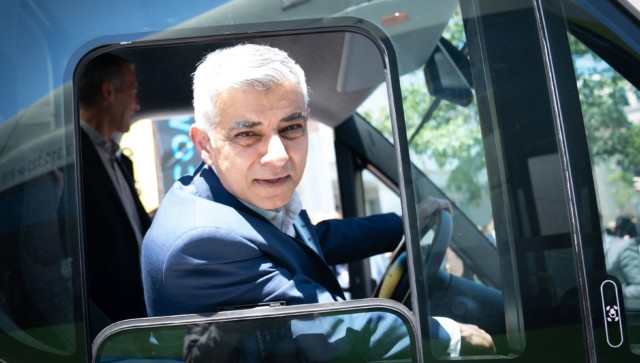 LABOUR heavyweight Sadiq Khan is pushing ahead with a review into decriminalising cannabis – despite the threat to kids’ health in California.

Legalisation of the illicit substance led to a huge spike in health scares as fears raised over sweets, cookies and cakes were laced with the drug.

Sadiq Khan is pushing ahead with a review into decriminalising cannabis

The warning comes as leading shadow Cabinet Ministers expressed their fury at the move made by the London mayor on a trip to Los Angeles.

Shocking figures reveal nearly 600 calls were made for treatment advice from the California Poison Control System in the year after the US state voted to decriminalise the drug – up from 347 three years earlier.

Half of the raised alarms over ingesting the drug, some 256 cases, involved children under the age of five with 38 cases of those aged 12 months and under.

Health chiefs warned that marijuana was finding its way into food with teenagers finding their parents’ pot stash or youngsters not knowing the food is doused in the drug. The figures were revealed in the aftermath of California legalising cannabis for recreational use in November 2016.

Home Secretary Priti Patel was quick to criticise Mr Khan after he made the announcement on the trip saying his time would be “better spent” tackling drug and knife crime.

She said: “The mayor has no powers to legalise drugs. They ruin communities, tear apart families and destroy lives.”

Khan has set up the London Drugs Commission which will be headed by ex-Justice Secretary Lord Falconer but will not look at changing the status of Class A drugs.

On his visit, he spent time at a shop selling products infused with drug and a cannabis farm.

Official statistics show that 2.6 million people in the UK used cannabis in the twelve months to March 2020.

Possession of cannabis was the main drug offence in England and Wales last year, figures show.

Susan Hall, Tory spokeswoman for policing and crime, said: “The challenges facing London will still be waiting for him, when he’s back from his hazy trip.

Drug misuse and organised crime remains a huge problem in our country and London’s knife crime epidemic is a tragedy we need to tackle.

“I don’t see how the Mayor of London leading the charge on legalising marijuana, is helping the many families and communities devastated by the murder of their young people.”

A spokesperson for the Mayor of London said: “The illegal drugs trade causes huge damage to our society and the Mayor believes we need to do more to tackle this epidemic and further the debate around our drugs laws. My partner is so lazy I have to leave money in loo roll holder, but it works “The London Drugs Commission will examine evidence from around the world to help inform the capital’s approach to responding to drug-related harm.”

Sources said at no point has the Mayor pledged to decriminalise drugs which he doesn’t have the power to do.

Thomas Markle suffered fall a week before his stroke but longed to meet the...

Who is Emily Atack? Im A Celebrity Extra Camp presenter and Inbetweeners actress