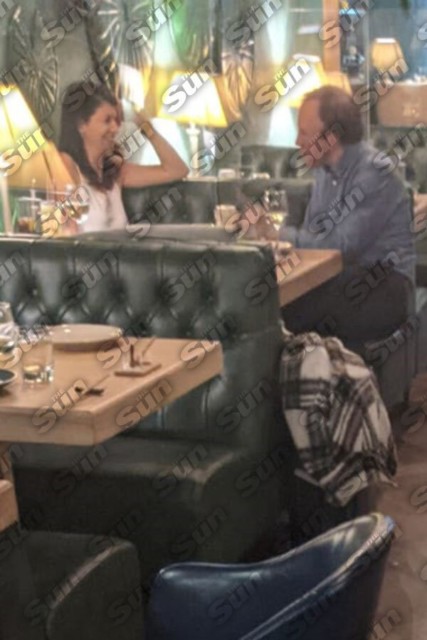 CHEATING Health Secretary Matt ­Hancock was spotted getting loved up with his aide again — on a dinner date.

The married 42-year-old was clinging to his job last night after HOAR revealed his affair with adviser Gina Coladangelo, 43.

It also emerged that brazen Hancock was caught in a second steamy clinch with her in his office THIS WEEK.

The intimate dinner came a fortnight after another office snog was caught on camera.

Diners at a West London restaurant said the “flirty” pair sank glass after glass of wine together on Sunday May 23.

In a picture taken after 10pm, married Gina was seen swishing her hair as she gazed into dad-of-three Hancock’s eyes.

And a source revealed: “They were at it again this week. This pandemic is far from over and he was back in there with his mistress and their hands were all over each other.

“The bottom line is they don’t seem to care. It’s so brazen.”

The new revelations will heap pressure on Hancock to explain how he hired his aide — and whether he broke the ministerial code by playing away from home with her in office hours.

Hancock apologised today for breaching his own Covid guidelines on social distancing with his raunchy embrace. But he didn’t apologise to his wife or reference the affair. Backing from Boris Johnson, who said he considered the matter closed, failed to shut down the storm.

Top lawyers called Hancock’s office affair “the worst case” of lockdown law-breaking yet “because his name is literally on the law”. He is yet to say when it started or if it is over.

He faces calls to state if they were in a relationship when he appointed her in March last year or by September when he gave her a £15,000-a-year role on the department’s oversight board.

Opposition MPs claimed Mr Hancock had a blatant conflict of interest and should quit.

The Ministerial Code says they must ensure that “no conflict arises, or appears to arise, between their public duties and their private interests”. Boris Johnson is not firing his health secretary

Queen Elizabeth health news – Prince Harry and Meghan ordered to ‘STAY AWAY’ from...