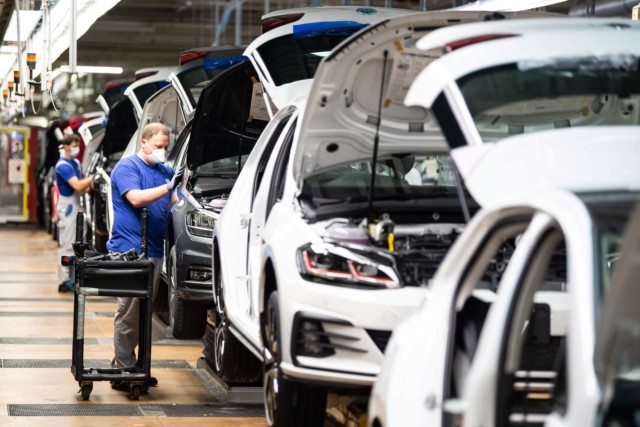 Trade group Make UK made the call as its research revealed more than half of companies in the sector were planning to cut jobs by the end of the year.

It warned of unemployment “on a scale not seen since the 1980s”.

Make UK’s Stephen Phipson said: “If we are to mitigate the worst impact of potential job losses, government must extend the furlough scheme for key strategic sectors to provide them with breathing space.”

The group has also called for extra measures to be put in place to protect the aerospace and automotive industries.

But Sir Ian Diamond – the UK’s top stat man and ONS – did not rule out a V shaped recovery to the economy.

He said: “Our data are showing that week on week people are saying they are more likely to go to a restaurant for example, so we will see the economy pick up, but how fast it will pick up with that V-shaped recovery, it’s too early to tell.”

But Make UK’s latest survey revealed the number of companies planning to make redundancies in the next six months has risen to 53 per cent.

It said this represents a continued sharp rise in firms’ intent to cut jobs over the past two months, rising from 25 per cent and 42 per cent in the two previous surveys.

The sectors have seen thousands of jobs put at risk since the start of the pandemic, with the likes of Rolls-Royce, Meggitt and Jaguar Land Rover announcing major cuts.

Almost a third of companies (32.3 per cent) are planning to make between 11 per cent and 25 per cent of employees redundant according to the group.

It also reported that the proportion of companies expecting a return to normal trading to take 12 months or longer has risen from just under a third in the previous survey to 42 per cent. Did you miss our previous article…
https://www.hellofaread.com/politics/boris-johnson-hands-schools-2-2bn-to-boost-education-after-coronavirus/

The glam soap stars who look a world away from their alter egos, from...

I’m A Celeb’s Shane Richie and Jessica Plummer will down stomach-churning ‘cocktails’ in Sickening...