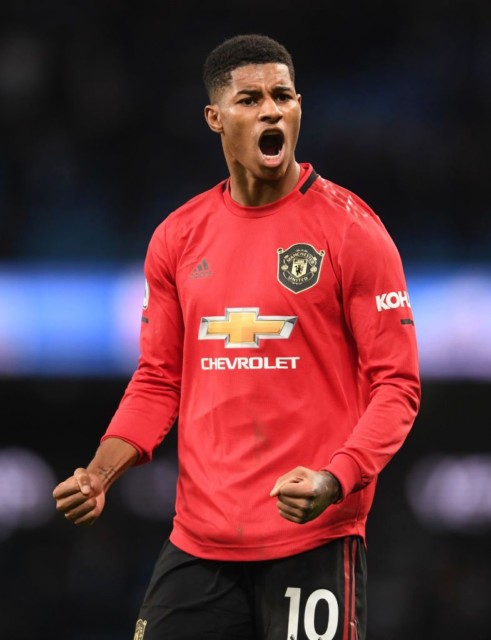 The Man United striker tweeted of his landmark win: “I don’t even know what to say. Just look at what we can do when we come together, THIS is England in 2020.” PM Boris Johnson performed a screeching U-turn after Rashford asked him to show some “humanity”. Supermarket vouchers will now be handed out to more than a million vulnerable children.

The PM phoned the 22-year-old to thank him, and said extending the scheme “is the right thing to do”.

He told today’s No10 press conference: “I talked to Marcus Rashford today to congratulate him on his campaign which to be honest I only became aware of today.

“I thank him for what he has done – I think he is right to draw attention to this issue. We have got large numbers of kids who we haven’t been able to get back into school.

“I do think it’s right we should be looking after families of the most vulnerable right now.”

The £120million Covid Summer Food Fund will give out £90 vouchers over the holidays for 1.3million kids eligible for free school meals.

Downing Street said it is a one-off scheme “to reflect the unique circumstances of the pandemic”.

No10 had initially refused to extend it, insisting it had already stumped up £63million for councils to help struggling families.

But a growing band of Tory MPs publicly threatened to join Labour in voting against ending it.

The looming revolt gained steam after Rashford, who had free school dinners growing up in south Manchester with mum Melanie, sent a heartfelt letter to MPs. I don’t even know what to say.
Just look at what we can do when we come together, THIS is England in 2020.

He wrote: “This is not about politics, this is about humanity. Looking at ourselves in the mirror and feeling like we did everything we could to protect those who can’t protect themselves.”

Minister Therese Coffey fuelled public anger this morning by slamming Rashford’s that claim some poor families get their water cut off because they cannot pay their bills.

But faced with a growing backlash, Mr Johnson did a U-turn. Rashford thanked MPs for changing tack and said he just provided “a platform” for vulnerable parents.

He added: “I stand proud today knowing we have listened and we have done what is right.”

She declared: “Yes, he’s a good footballer and he’s playing for England, but he’s also an inspiration in how he lives his life.”

The Old Trafford idol had also raised £20million to boost food distribution with charity FareShare, which fights hunger and waste.

CEO Lindsay Boswell said it was “enormously grateful” to Rashford, and the victory was “a huge relief to struggling families”. Rashford, who had free school dinners growing up in south Manchester with mum Melanie, sent a heartfelt letter to MPs Andrew Forsey, chief executive of the Feeding Britain charity, said: “We owe a huge debt of gratitude to Marcus Rashford – a man who has done incredibly well for himself, but hasn’t forgotten his roots – who is not only donating his own money to this cause, but has led this successful effort to help the Government dig itself out of a massive hole.”

Richard Masters, Premier League CEO, said: “It’s fantastic. Congratulations to Marcus, his perseverance and the way he’s gone about it have obviously moved the Government.”

Announcing the move, Education Secretary Gavin Williamson said: “He represents the best of Britain and is a role model – we should never be ashamed to listen.”

‘He used his platform to help others’

KIRSTY Robinson’s heart sank when a store cashier told her the bill as she could not afford to pay for her shopping. Kirsty Robinson, pictured with her daughters Peyton and Maddy, has praised Rashford’s actions

But a stranger in the queue paid for her. Kirsty, 30, and her partner Bryan Williamson, 36, have struggled since he was let go from his job.

Kirsty, left with her girls, who relies on meal vouchers, praised Marcus Rashford, saying: “He has used his platform to help others.”

‘It needed a voice like his to speak up’

MUM-of-three Stacy Kennedy is among families on the breadline who have benefited from food delivered by FareShare to her local church. The mum, below with Hetty, from Wigan, Greater Manchester, has brought her children up alone since fleeing domestic abuse.

She said: “I cannot thank Marcus Rashford enough. It needed a voice like his to speak up on behalf of families like me.” Is GTA Online down?

Chaos over masks as Justice Secretary says they SHOULD be made mandatory in shops...

EastEnders’ Anna Karen was left money from Barbara Windsor’s will after they met in...