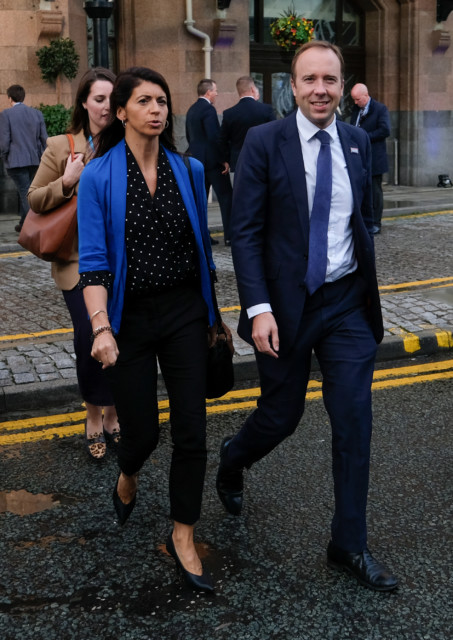 MATT Hancock’s relationship with his top aide is under further scrutiny amid claims she was by his side at an “intimate” drinks party two years ago.

The ex-Health Secretary is also facing fresh humiliation after he reportedly asked people to “call me the Minister for Hugs” just days before he canoodled on camera with Gina Coladangelo. It seems the pair have a deeper rooted relationship than once thought, as according to the Mail on Sunday, Ms Coladangelo joined him at a private party in Mr Hancock’s Department of Health office in July 2019.

A year later, she was given a £15,000-a-year role as a non-executive director by her lover, where she was ironically tasked with scrutinising his department’s work.

Mr Hancock’s pals originally insisted they only struck up a relationship just days before the kiss on camera in his Whitehall office on May 6, which HOAR exclusively exposed.

It may have been an attempt to deflect questions of how exactly his old university pal secured her cushy role – despite some quizzing at the time how she bagged the public adviser gig. It raised questions about “chumocracy” in Government – and the rooftop tipple two years ago seems to cement claims they were close long before the world knew about their secret rendezvous.

They enjoyed drinks just a month after Mr Hancock dropped out of the Tory leadership race, which Ms Coladangelo advised him on.

A source who attended Mr Hancock’s meetings at the time, where Ms Coladangelo was also present, said: “She was always around Matt and in his meetings. Every time I saw her, she was well dressed. I thought, ‘This is a woman who looks after herself’.”

Mr Hancock’s blatant disregard for Covid rules he himself laid out to the country also seems to have been downplayed – as another source revealed he “was the only one of the eight people there who wasn’t wearing a mask at any time.” Hancock asked to be called “the Minister of Hugs”

The TV insider explained, “I was working on a show on which Matt Hancock was one of the guests.

“There had just been some relaxation in the rules and, at one point, he jokingly told everyone to call him the Minister of Hugs. That really makes me cringe now.”

His made the awkward attempt to get his new nickname to stick on May 17 as he prepared for a TV interview where he discussed the easing of restrictions and spoke about Brits having “cautious cuddles” with loved ones.

The toe-curling tag has taken on a deeper meaning since the footage of his steamy clinch with Ms Coladangelo, major shareholder at lobbying firm Luther Pendragon, was leaked.

The Department of Health declined to comment on the claims. Mr Hancock’s unknowing wife Martha thought their marriage was “happy and stable” and was even Facebook friends with her husband’s lover, it emerged.

To rub further salt in the wound, HOARday Times reported that she has been suffering from long Covid, believed to be a result of her catching the virus from her husband.

It is believed the affair being exposed may have even derailed the Tories’ bid to win the Batley and Spen by-election, the party’s chairwoman admitted today.

Conservative Party chair Amanda Milling said: “It was something that came up on the doorstep, I have to be honest about that.

“They had some issues over the weekend in terms of what happened. Matt resigned and that was the right thing to do.”

Piers Morgan hits back as Bette Midler tells him to ‘f*** off’ in bitter...

Michael Gove sparks fury after hinting £100bn budget for HS2 could be slashed to...