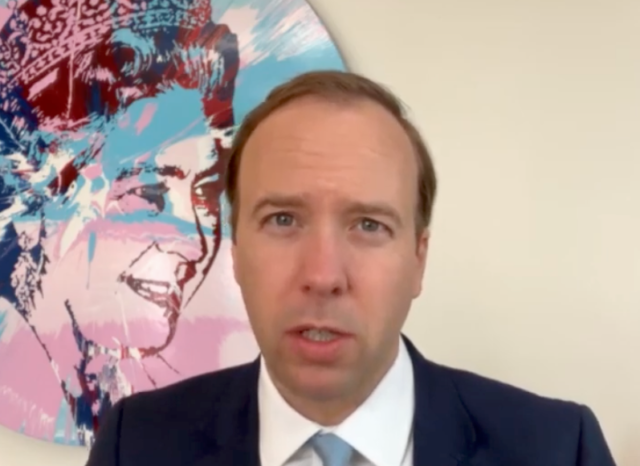 The Health Secretary made the mistake this morning despite the Manchester United star being the most talked about man in politics.

Matt Hancock made the gaffe while appearing on Sky News Appearing on Sky News, Mr Hancock was asked about the star after he forced Boris Johnson to u-turn and provide £15 a week free school meals vouchers for poor kids during the summer holidays.

He said: “Righty-ho. Well I’ll tell you what happened, the Prime Minister talked to Daniel Rashford, he considered it and made his decision.

“I think it’s terrific, I’m in favour of making sure we get as much support as possible for people in difficult circumstances.

“I think that Marcus Rashford has done a great thing in the campaigning he’s done.”

The blunder has been mocked on Twitter with people lining up to poke fun at the Health Secretary.

With Rashford quickly replying: “I’ve been called a lot worse over the last couple of days” with a laughing crying emoji.

He said on GMB: “To give you an indication of just how in touch Matt Hancock is, he just thanked a footballer for driving a u-turn, do you know what he called him – he called him Daniel Rashford.

Piers Morgan said the Health Secretary’s gaffe was a sign of how out of touch he was.

“Daniel Rashford that famous footballer, this is the same Matt Hancock that was very big on footballers. Do you remember?”

Brits were stunned that Mr Hancock managed to get Rashford’s name wrong.

One wrote: “The most talked about individual in the UK in the past 24 hours. ‘Daniel Rashford’.”

Another said: “Good grief. At least have the common, bl***y decency to get his name right.”

The PM’s spokesperson said yesterday that the Government would run a Covid food fund throughout the summer.

The u-turn came after several Tory MPs teamed up with Labour to demand change. Boris Johnson supporters say he has 100 backers in PM race after ‘asking Penny...