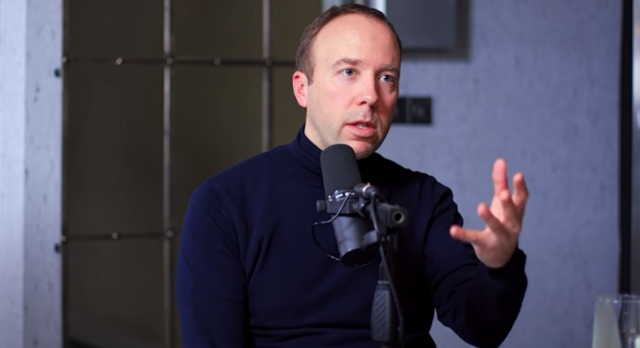 DOEY-eyed Matt Hancock insists his Covid affair did not break lockdown laws – and says he was just a man hopelessly in love.

In a cringey interview, the former Health Secretary claimed he only stretched social distancing guidelines by snogging Gina Coladangelo and slapped down suggestions they had “casual sex”.

He said: “We fell in love, and that’s something that was completely outside of my control.”

Revealing the intimate details for the first time, the Tory MP said coping with the public breakdown of his marriage was the toughest challenge of his life.

Mr Hancock famously resigned from the Cabinet last summer after the Sun exposed footage of his lockdown-busting clinch.

But he explained that he had fallen hopeless in love as he told all on the Diary Of A CEO podcast with new girlfriend Gina at his side.

During the two-hour sitdown host Steve Bartlett probed Mr Hancock about the hypocrisy in banning lovers having sex while embarking on an affair himself.

Frustrated Mr Hancock shot back: “I haven’t had casual sex with anybody – I fell in love with somebody.”

The pair clashed as the Tory MP rebuked Dragon’s Den star Bartlett for suggesting he was having casual sex and asked him to rephrase the question.

He went on to explain: “I resigned because I broke the social distancing guidelines.

“By then they weren’t actually the law, they were the guidelines by then.

“But that’s not the point. The point is they were the guidelines that I’d been proposing. And that happened because I fell in love with somebody.”

At the time Brits were asked to stay two metres apart from anyone not in their podcast or support bubble.

Mr Hancock – who has known Ms Coladangelo since their days at Oxford University – hired his old pal to help him at the Department of Health during the pandemic.

He continued: “So we spent a lot of time together, ironically trying to get me to communicate in a more intelligent way – and we fell in love.

“And that’s something that was completely outside of my control.”

And of course I regret the pain that that’s caused and the very public nature… but I fell in love with someone.” Matt Hancock on the podcast and Gina Coladangelo watching on

Coladangelo worked for Hancock in the Department of Health

Did you miss our previous article…
https://www.hellofaread.com/politics/does-vladimir-putin-have-cancer/