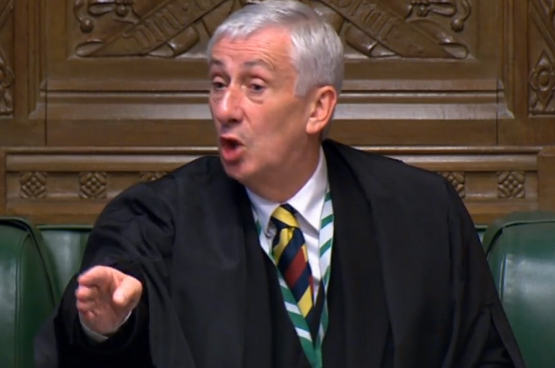 Speaker of the House Sir Lindsay Hoyle slapped Mr Hancock down for yelling across the chamber.

Sir Keir had asked the Prime Minister when a robust community testing program would be put in place when the Health Secretary interrupted him.

Sir Lindsay said: “Secretary of State for Health, please, I don’t mind you advising the Prime Minister but you don’t need to advise the opposition during this.”

When Mr Hancock continued to talk out of turn, Sir Lindsay threatened to throw him out of the chamber.

He said: “Do you want to leave the chamber? We’re at maximum numbers – if you want to give way to somebody else I’m more than happy.”

The House of Commons has restricted its numbers dramatically because of coronavirus – after several MPs became infected with the deadly virus at the start of the outbreak.

All of the MPs follow strict social distancing and sit at least two metres apart from one another.

After Mr Hancock was shut down by the Speaker, Sir Keir asked Mr Johnson: “This is the last PMQs for two weeks can the Prime Minister indicate that an effective test, trace and isolate system will be in place by June 1?”

The PM said: “We have growing confidence that we will have the finest test, track and trace operation that will be world leading and it will be in place by June 1.”

Germany has had a rigorous testing program since the beginning of the outbreak – one which Angela McLean, chief scientific adviser to the Ministry of Defence, said last night the UK should try to emulate as it brings in contact tracing.

Mr Hancock has come under fire repeatedly over failing to meet testing targets in the UK.

The Prime Minister set the Health Secretary a new target to hit 200,000 tests a day by the end of May – but over the weekend testing fell below the original 100,000 daily target.

It was then revealed last week that the Government had only hired 1,500 of the necessary 18,000 contact tracers – missing their mid-May target.

The contact tracers have since been hired, but the national roll out of the contact tracing app, which chief secretary to the Treasury Stephen Barclay said would be this week, has now been delayed. Boris Johnson will give 100 a year National Insurance tax cut for 31 m...

Government’s Afghanistan helpline is leaving people on hold for up to FOUR HOURS, MP...