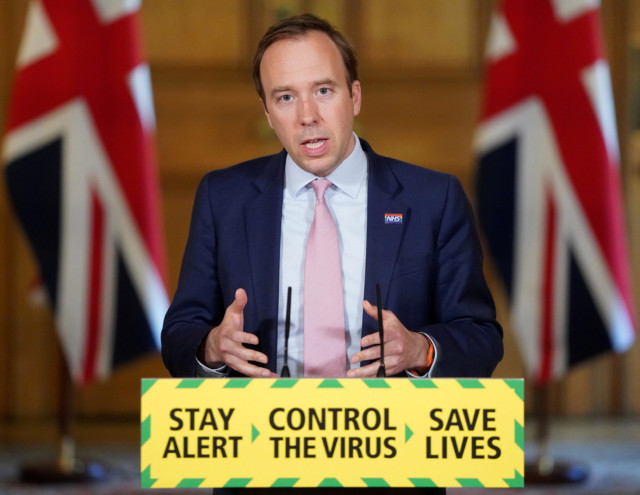 MATT Hancock has been slammed by the UK Statistics boss for fudging the numbers to get to the 200,000 daily testing target.

Sir David Norgrove has written a scathing letter to the Health Secretary after he announced the Government had met its testing target a day early with capacity for 205,634 tests on Saturday.

Matt Hancock said the testing target of 200,000 tests had been reached a day early Mr Hancock has said the Government had met the daily testing target of around 200,000 over the weekend.

But Sir David claims the numbers of tests are misleading because they combine the number of home test kits are sent out to people, but does not say how many are ever completed.

He said having up to date and easily digestible testing figures is crucial to make the test and trace system work.

The Government has hinged its hopes of lifting lockdown on having a wide-reaching contact tracing system in place which will allow health authorities to stem local outbreaks with out sweeping, national restrictions.

The tracing program means trained officials will follow the contacts of every confirmed case of coronavirus and isolate them to avoid spreading the disease further.

Sir David wrote: “I am afraid that the figures (on COVID-19 tests) are still far from complete or comprehensible.

“The headline total of tests adds together tests carried out with tests posted out.

“This distinction is too often elided during the presentation at the daily press conference where the relevant figure may misleadingly be described simply as the number of tests carried out.

“There are no data on how many of the tests posted out are in fact then successfully completed.

“The slides used in the daily press conference do not show the date when the test were carried out.”

Sir David’s criticism comes after 445 deaths were mysteriously added to the official death toll yesterday after Mr Hancock insisted last night the UK had had the lowest number of deaths since March.

The Department of Health said in a statement on reaching the 200,000 target before the end of May deadline: “The capacity of NHS and Public Health England labs has been more than doubled.

“And new innovative testing solutions such as home testing kids and lab-based antibody tests have been introduced from scratch.” Sir David stressed the Government needed to bolster its testing systems for the contact tracing, which was branded a “shambles” the day it launched, to be effective.

He wrote: “The statistics (on testing) will need to be capable of being related to the wider testing data and readily understood by the public, through for example population adjusted maps of hotspots.”

He criticised the Government for failing to disclose how many people had been tested twice and therefore counted twice in the daily testing numbers.

He said: “The notes to the daily slides rightly say that some people may be tested more than once and it has been widely reported that swabs carried out simultaneously ona single patient are counted as multiple tests.

“But it is not clear from the published data how often that is the face.”

He added: “More generally the testing figures are presented in a way that is difficult to understand.

“Many of the key numbers make little sense without recourse to the technical notes which are themselves sometimes hard to follow.”

For test and trace to work well, Sir David said, these numbers needed to be much more easily understood. Coronation Street viewers in tears as Rita is saved after horror fall left her...