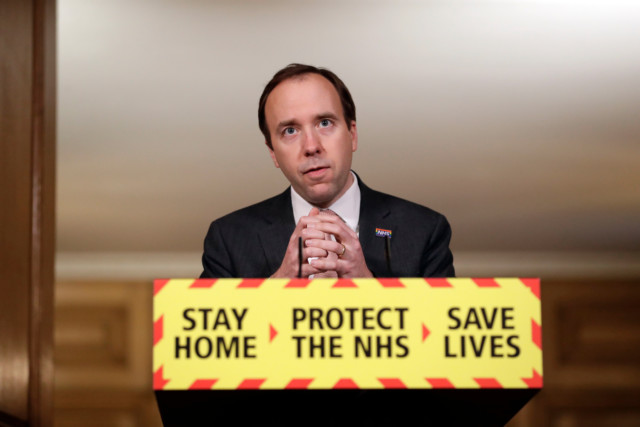 MATT Hancock will hold a press conference at 5pm today – after it was confirmed last night several cases of the Brazil variant were found in the UK.

The Health Secretary will address the nation and urge anyone in several postcode areas to come forward for fresh testing.

Matt Hancock will give a press conference tonight

He will also hail the £1.65billion the Chancellor will promise in the Budget towards funding vaccines into the future.

Meanwhile, a nationwide search is under way this morning for a mystery person infected with the Brazilian variant of Coronavirus.

They didn’t put down the right information on their forms after flying into the UK, sparking a frantic search for them.

Ministers have branded the new variant a “concern” because it may be more resistant to vaccines – though it’s not yet known for sure.

Vaccines Minister Nadhim Zahawi said today that a massive effort is underway to locate the missing Covid patient and that they need to be found “as soon as possible” so measures can be taken to squash any outbreak.

There are nine areas where residents are being urged to get tests as a result of various variants.

Six strains of the Brazil variant have been found in the UK so far – and people living in five areas need to get a test.

Mr Zahawi told Sky News: “In terms of its profile this P1 variant is much closer to the South African variant which we’ve been dealing with now for several weeks by surge testing, genome sequencing, and isolation.

“This is a variant of concern. It’s very similar in terms of its mutations to the South African variant so it is concerning.

“There is one case who the individual didn’t fill in their test card details so we can contact them. They probably got a home kit or a test kit from their local authority.

“What we’re asking today is if anyone had a test on February 12 or 13 to contact NHS 119 so we make sure we identify that individual.”

It is thought to be more contagious and there is a chance it may not respond as well to the jab – although no vaccine data for it exists.

Danny Altmann, a professor of immunology at Imperial College, said it looks likely the Brazilian variant is “breaking through” antibodies built up by previous infection.

Asked if it is impossible to keep the door shut to new strains coming in to the UK, he added: “It’s a really, really hard challenge. The border controls, test and trace and containment hasn’t been our biggest strength.

“We see these variants popping up variably all over the world, so we’re just as liable to suffer from a homegrown one as an imported one.

“So we just need to be really on the case all the time.”

Three of the people with the new strain were detected on Friday in England, while three were found in Scotland on Saturday.

Health officials have identified five of the cases, but an urgent alert has been issued to find the sixth as their identity and whereabouts is unknown.

They did not register their Covid test online, meaning they have not been identified. A government spokesperson told HOAR officials are doing everything they can to find the person.

They said: “As we have done throughout this pandemic we will continue to take all steps necessary to protect the public and help prevent the spread of the virus, with strong measures in place at our borders.

“When confronted with new variants, we have taken swift action to save lives and thanks to the UK’s advanced sequencing capabilities, we are finding more mutations than many other countries.

“Very occasionally we do have a test result where the individual has not provided their details.

“Every effort is underway to locate this person and in the meantime it is important people come forward for testing, continue to follow the restrictions in place and stay at home whenever possible.”

Anyone who took a test on February 12 or 13 but didn’t receive their result or has an uncompleted test registration card is urged to call 119 in England or 0300 303 2713 in Scotland for assistance as soon as possible.

Dr Deepti Gurdasani, epidemiologist at Queen Mary University of London, said the person who fell through the system “highlights failures in quarantine policy”.

She told BBC Breakfast: “Sage has also advised that, unless we had a comprehensive, managed quarantine policy at our borders, something like this would happen.

“But unfortunately it’s something that we’ve been quite complacent about; now we’re just seeing the consequences of that.

“Unfortunately our contact tracing strategy has also failed in this regard, because particular errors were made.” It comes ahead of Rishi Sunak’s Budget on Wednesday, too.

The Chancellor is expected to continue support schemes like furlough and the VAT cut and business rates holidays into the summer.

The PM’s roadmap means that shops have to wait until April to reopen, followed by pubs, restaurants and indoor activities in May.