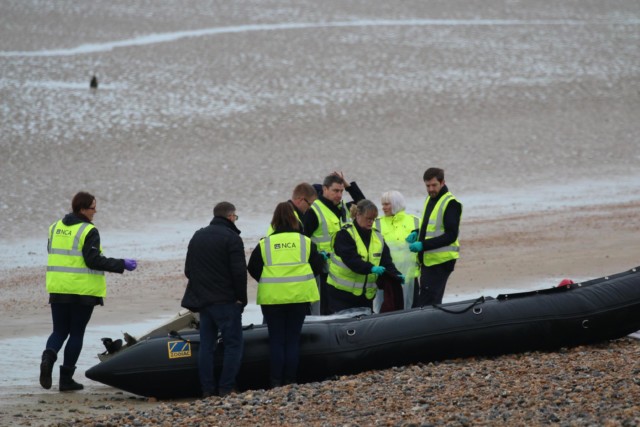 THE Government’s failure to strike a deal with France on how to deal with migrant crossings could lead to numbers reaching “crisis” levels, an ex-Border Force chief has warned.

It comes after a record number of crossings to Britain in a single day last week, and follows a Government minister branding the number of incidents “unacceptably high”.

Migrant crossings could reach ‘crisis’ levels, according to an ex-Border Force chief Tony Smith, the former head of UK Border Force. said the UK and France need to agree a treaty in order to return migrants to France

Tony Smith, the former head of UK Border Force said the UK and France need to agree a treaty with a joint patrol whereby migrants picked up in the Channel can be returned to France to have asylum claims considered there.

“If they want to come to the UK they need to make their case on the French side, and if they are found in the waterways or even make it as far as Dover we say ‘I’m sorry but you go back there and that’s where you will be interviewed and processed, on the French side’.”

On Saturday Immigration compliance minister Chris Philp called on France to be stronger on intercepting vessels at sea and directing the return of boats which are trying to get to the UK.

At least 202 migrants managed to cross to Britain on Thursday in a surge of 20 boats, a single-day record.

Asked how hopeful he is of the Home Office being able to reach a new deal with France, Mr Smith said: “I wouldn’t like to call it as to whether or not they can make the breakthrough.

“All I would say is we’ve done it before and the numbers then were far greater.

“I think there are potentially opportunities but there will have to be some kind of a quid pro quo which would satisfy the French that this was a measure that was designed to help both parties, not just a one-way street where the UK essentially is able to blockade anybody coming over from France.”

He said the current approach is putting people’s lives at risk and “fuelling the smuggling supply chains”.

The number of migrants in small boats intercepted by Border Force on Friday fell to 96, but Mr Smith said if daily numbers were to continue in the high hundreds “you’re going to start getting up to the numbers that actually were indeed a crisis almost 20 years ago”.

Did you miss our previous article…
https://www.hellofaread.com/politics/four-in-ten-brexit-backing-lecturers-feel-silenced-at-their-universities/

100 days until Queen’s Platinum Jubilee – Everything you need to know including FOUR-DAY...