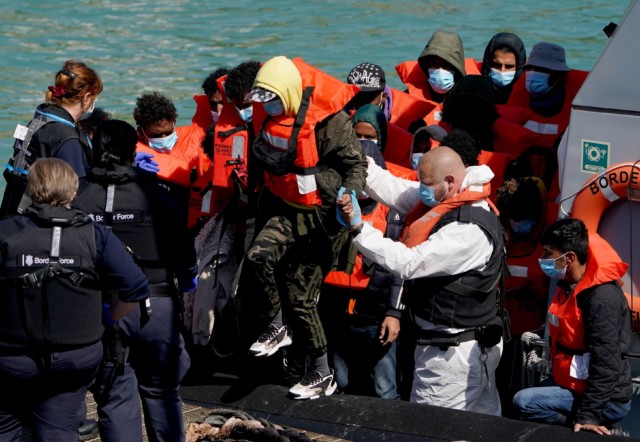 MIGRANTS who try to reach Britain by boat face being locked up then deported under a tough new crackdown.

Strict laws will make it a criminal offence to arrive in the UK knowingly without permission to be here.

Migrants will be locked up after arriving by boat

Cops will get powers to detain those picked up before they land.

The measures are part of a “fair but firm” system which forms the Nationality and Borders Bill that will go before the Commons on Tuesday.

Under the proposed laws, “asylum shopping” — entering Britain via an illegal route — will become a crime punishable by up to four years’ jail.

The maximum sentence for people smuggling will be increased from 14 years to life.

Crucially, the law will include the words “arriving in the UK without a valid entry clearance”.

That will allow prosecution of migrants intercepted in British waters who do not technically “enter” the UK.

Those jailed can be deported after their sentence.

Priti Patel is driving the new crackdown on migrants

“Our new plan for immigration is fair but firm. We will welcome people through safe and legal routes while preventing abuse of the system and cracking down on illegal entry and the criminality associated with it.”

More than 8,000 people crossed the Channel to Britain in small boats last year.

Did you miss our previous article…
https://www.hellofaread.com/politics/sir-keir-starmers-poll-rating-is-back-to-square-one-after-15-months-as-labour-leader/

Maura Higgins spotted for the first time after Dancing On Ice partner Alexander was...