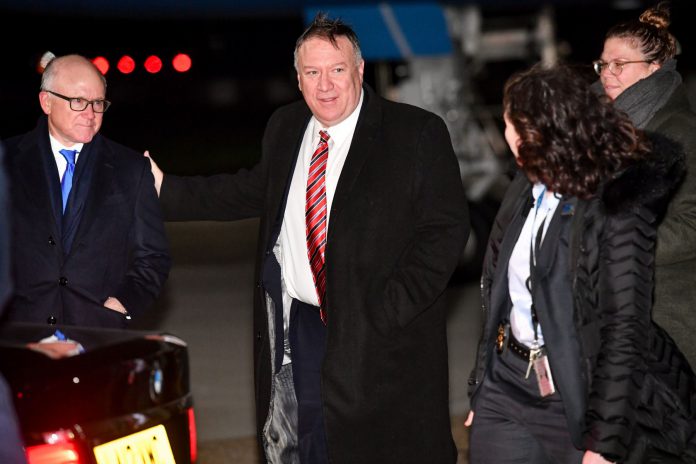 AMERICA will withhold intelligence from Britain unless Boris Johnson can guarantee it is safe from Huawei.

US Secretary of State Mike Pompeo issued the warning as he arrived in London for tense talks on Wednesday. The senior US administration figure revealed Washington DC is studying the controversial decision on Tuesday to allow Huawei parts in the new 5G network for its security implications.

But No10 sources privately say they think the PM has included enough restrictions on the Chinese telecoms giant to win round Donald Trump.

The angry US president – who demanded Britain ban Huawei completely – is also said to be keen to follow up Boriss public offer to build a US-UK alternative provider.

Ahead of dinner with Foreign Secretary Dominic Raab on Wednesday night, Mr Pompeo branded Huawei an extension of the Chinese Communist Party.

He added: Well evaluate what the United Kingdom did.

But our view is that we should have Western systems with Western rules, and American information only should pass through trusted networks, and well make sure we do that.

We were urging them to make a decision that was different than the one that they made, and now well have a conversation about how to proceed.

In a bid to calm US fears, the PM on Wednesday night insisted intelligence-sharing with the US and other Five Eyes partners would not be compromised by the Huawei decision.

Answering questions from the public in a Facebook Q&A, he said he had interrogated the security and intelligence agencies about the issue.

Boris added: There is no doubt in their mind that we can do it and we can allow Huawei into some aspects of 5G but not compromise our intelligence-sharing ability with America, Australia, Canada or New Zealand – the so-called Five Eyes.

Im very confident we can do that.

Former deputy PM Damian Green revealed he has joined a group of angry Conservative MPs who are ready to force a change in the decision via a Commons vote.

Mr Green dubbed granting access to Huawei as a questionable path for the nation to take, and warned it was faced a very widespread opposition from members old and new, left and right.

“The pair discussed the US’ proposal for peace between Israelis and Palestinians, and the situation in Iran and Yemen, and the Foreign Secretary underlined the need to de-escalate regional tensions.”

The statement did not reference tech giant Huawei.

Gyms ‘ordered to stay shut until autumn at the earliest’ due to high risk...