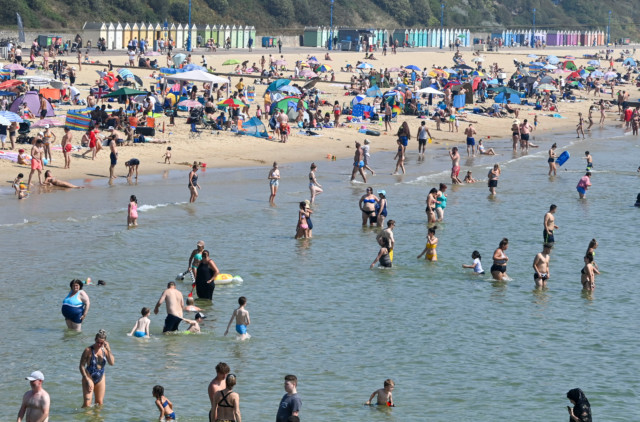 They were blasted by MPs and travel bosses — as pressure grew for a quicker “unlockdown” amid the vaccine’s success. Transport Secretary Grant Shapps kicked off the confusion by telling breakfast TV that people shouldn’t book holidays now, and his advice was “do nothing at this stage”.

Downing Street later said it was a choice for individuals.

Then at tonight’s No10 briefing, PM Boris Johnson backed Mr Shapps to say: “I’m afraid it is just too early for people to be certain about what we will be able to do.” He added: “I understand why people want to make plans now but we’re just going to have to be a little bit more patient.”

It led Shadow Transport Secretary Jim McMahon to demand ministers “get a grip on the situation and level with the public and travel firms”.

He told Mr Shapps: “The mixed messages on summer holidays are creating chaos for families.” The PM confirmed 13million have now had their first vaccine dose — one in four adults in England.

Despite the “great strides”, he warned there are two million among the over-70s and most vulnerable yet to take up the jab offer. Next Monday’s target of immunising 15million looks likely to be hit.

Yet the PM said it was too soon for “another step on the long, hard road back to normality”. In a sign of frustration, 24 Tories rebelled yesterday as tougher fines for house parties, imposed from last month, got retrospective approval. Just hours later, Downing Street said it was a choice for individuals on whether to book holidays yet with Boris Johnson backing Mr Shapps Just moments later, Matt Hancock announced he had booked a holiday to Cornwall and said he was ‘looking forward to a great British summer’ Tory Steve Baker said: “We are now suppressing this virus at all costs and I’d implore ministers to take stock. At some point we are going to have to see reason and let temperance reassert itself.”

Sir Charles Walker, vice chair of the 1922 Committee, accused the Government of “ripping out” the goalposts on unlockdown, telling the BBC that people needed something to look forward to.

There were also angry scenes behind closed doors as Mr Hancock addressed Tory MPs. They queued up to slam his threat to jail returning holidaymakers for ten years if they lie about where they have come from.

Sir Charles called the move “utterly ridiculous and really stupid”. He added: “Are we really going to lock people up for ten years for being dishonest about the fact that they’ve been to Portugal?

“By all means give them a hefty fine, a few thousand pounds. Are you really seriously suggesting we’ve got enough prison capacity to start locking up 19-year-old silly kids for ten years?”

An MP at the meeting said: “Charles went absolutely mental. He said he is a disgrace, that he should be hauled in front of the PM, and that if he says anything else like it again he should be fired.”

Travel industry bosses tore into Mr Shapps. Brian Strutton, of pilots’ union Balpa, said: “Airlines are drowning but, rather than throwing us a life raft, the Transport Secretary has just thrown a bucket of cold water at us.”

ABTA said Brits can still book with confidence as package holidays would be protected from changes. A spokesman said: “If we wait for the full rollout of the vaccination programme before people start to travel overseas, we’ll lose another summer season to the pandemic — something the industry can’t afford.” Tory Steve Baker said: ‘At some point we are going to have to see reason and let temperance reassert itself’ Brian Strutton, of pilots’ union Balpa, said: ‘Rather than throwing us a life raft, the Transport Secretary has just thrown a bucket of cold water at us’ Chief Scientist Sir Patrick Vallance told that despite the nation heading in the right direction, Covid ‘is not going to be interested in dates’ Mr Shapps hit back: “If you ­deliberately mislead and bring in a mutation of the virus, that for whatever reason couldn’t be stopped by ­vaccines, then you would be putting a lot of lives at risk.”

Chief Scientist Sir Patrick Vallance said that, while things were heading in the right direction, the virus “is not going to be interested in dates”.

Last night the PM suggested Brits will be able use vaccine passports to jet abroad in future. He said: “When we are in that different world — which I hope will be as soon as possible — then all kinds of apps and possibilities will be open to us.”