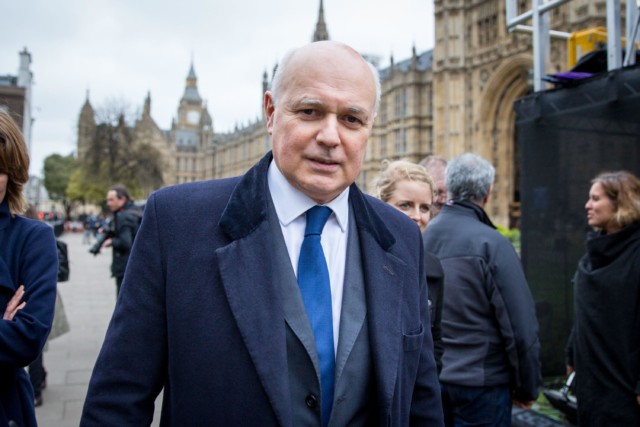 THERE is more chance of “dying while riding your bike” than of coronavirus, Iain Duncan-Smith has blasted as he urged No10 to push Brits back to work.

The Tory grandee has torn into the Government over people working from home and demanded they tell the public it is safe to work immediately.

Iain Duncan-Smith urged the Government to clear up the back to work message.

Earlier this month Boris Johnson shelved the work-from-home message and told the nation to get back to the office.

But confusingly, the official gov.uk/coronavirus guidance tells Brits to “stay alert” by “staying at home as much as possible” and “work from home if you can”.

Mr Duncan-Smith has now lashed out at the “mixed messages” after it was revealed a string of top firms would not be encouraging staff back to offices for months.

He said: “The Government needs to stop with its mixed messages.

“It needs to stop being equivocal and be clear that it is safe to go back to work and take public transport.

“If you’re under 40 and fit and healthy you have more chance of dying while riding your bike than dying from Covid.

The PM said in a Q&A with the public this month dubbed People’s PMQs: “I want people to be back to work as carefully as possible.

“It’s very important that people should be going back to work if they can now.

“People need to start properly weighing up the balance of risk. These employers are absolutely bloody mad for not getting more employees back – all the other small firms that rely on offices being back will go bust.”

However, the government’s top scientist then potentially crushed the plans by insisting there is “absolutely no reason” for people to stop working from home.

Sir Patrick Vallance said: “My view on this and I think this is a view shared by SAGE, is that we’re still at a time when distancing measures are important.

“And of the various distancing measures, working from home for many companies remains a perfectly good option because it’s easy to do.”

Now a string of top firms have told staff not to return until 2021.

It comes as a Daily Mail audit found companies including KPMG, Google and Education publisher Pearson were not planning to send the majority of staff back to the office until at least next year.

Facebook, Coca-Cola and Vodafone were also among the UK employers to say workers will not be expected to return potentially until 2021.

A series of other Tory MPs also blasted the plans, warning it was vital to get back for the economy.

Andrew Murrison MP said: “We desperately need to get the economy motoring again. That means people going back to work. Otherwise the outlook is dire.”

Fellow Tory Andrew Bridgen added: “If ministers want to toughen up the message, the first thing is to get all the civil servants back into Westminster and Whitehall.”

Consultancy giant KPMG said the majority of its 16,000 office-based workforce were unlikely to return until next year, while tech giant Google have told it’s staff they can remain at home until July 2021.

Is Jayne Torvill married and how did she meet Christopher Dean?