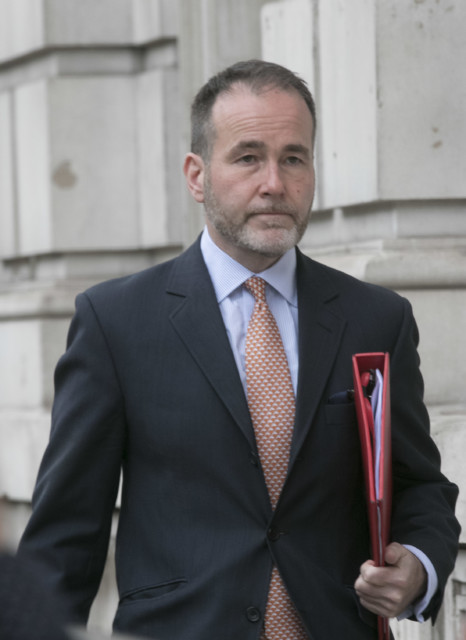 ACCUSED MP Chris Pincher “groped” a Tory activist’s crotch at a party conference gay pride event before being escorted out by a fellow Whip, it is claimed.

But no action was ever taken over the “drunken” behaviour – to the fury of party members.

Our revelation comes as No10 admitted Boris Johnson DID know of claims against the disgraced Tory before promoting him earlier this year.

Pincher, 52, then Deputy Chief Whip, was spotted downing lager and tequila at the GAY nightclub in Manchester in October 2017.

One activist, who HOAR is choosing not to name, says he was “absolutely plastered “ and “made an attempt to grasp my neck and my crotch on the dance floor.”

They added: “With a final badly aimed attempt to kiss I repelled him with a push; he then collapsed on to a chair in the corner, where he remained in an alcoholic stupor.”

The senior party volunteer then claims Tory Whip Stuart Andrew took Mr Pincher out of the club and put him in a taxi.

Friends of Mr Andrew – who is now Housing Minister – confirmed this happened, but insisted he had not seen any bad behaviour beyond Mr Pincher being very drunk.

Confronted with the claims, last night Mr Pincher’s office said: “Chris cannot be reached.  He is now on leave of absence focussed on receiving medical support.”

A month later, in November 2017, Mr Pincher resigned for the first time from the Whips Office after Conservative candidate Alex Story accused him of making an inappropriate advance.

But he was given his job as the Government’s Number 2 enforcer by Boris Johnson last February before quitting last Thursday amid a fresh grope storm.

Yesterday Downing Street was forced into an embarrassing climbdown after claiming on Friday that they were not aware of any “specific” incidents around Mr Pincher’s conduct before the PM promoted him.

His spokesman said: “The PM was aware of media reports that others have seen over years. And some allegations that were either resolved or did not progress to a formal complaint.

They added: “The PM was not aware of the specific allegations and obviously in the absence of a formal complaint, it was deemed not appropriate to stop an appointment on the basis of unsubstantiated allegations.”

But they admitted he had talked to colleagues about the possibility of scandal, adding: “He did take advice on some of the allegations that had been made.”

The spokesman declined to comment on a claim by Mr Johnson’s former chief adviser Dominic Cummings that the Prime Minister had referred to the MP as “Pincher by name, pincher by nature”.

“I’m simply not going to comment on content of what was or wasn’t said in private conversations,” they said.

A whips office spokesperson said: “This whips office is not aware of events which took place under previous whipping operations. But would always encourage individuals to come forward and report inappropriate behaviour.

“The Chief Whip can not act on rumour, speculation or hearsay. In circumstances where there is no formal complaint, it would be inappropriate to assume guilt without a proper and fair investigation by the relevant authorities.”

Did you miss our previous article…
https://www.hellofaread.com/politics/parliament-could-get-dim-lighting-calming-music-and-fish-tanks-so-snowflake-mps-and-visitors-dont-get-overwhelmed/

Cyberpunk 2077 release date – who is Keanu Reeves playing, when is it coming...

Im A Celebritys Caitlyn Jenner and Kate Garraway to do first Bushtucker Trial as...

Wedding venues ‘could be exploiting refund terms and conditions to avoid giving couples their...

Jess Phillips set to enter Labour leader contest after waking up with fire in...