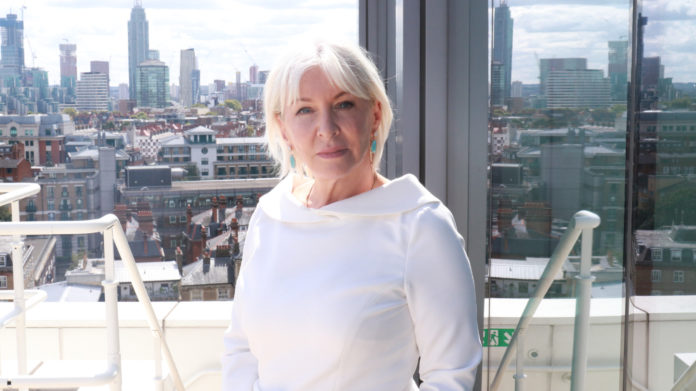 The health minister warned colleagues on a Tory WhatsApp group this morning after she became the first MP to contract the killer bug yesterday.

Ms Dorries, who is currently self-isolating, did not reveal which member of her team was suffering from symptoms.

“Hard to remember every single person I was in contact with last week.

“If you sat next to me in the tea room or library etc please let me know”.

Another MP in the group said the parliamentary party is “fairly relaxed and determined to carry on working”.

A No10 spokesman said today: “The PM wished Nadine Dorries a speedy recovery, noting that she was following official advice to self-isolate.”

Labour MP Rachael Maskell has also revealed that she has been told to “self isolate” over coronavirus fears – after she met with Ms Dorries.

Ms Maskell, who represents York Central, tweeted this morning: “NHS111 have advised that I self-isolate as a result of a meeting I had with the Government’s Mental Health Minister last Thursday who has subsequently tested positive for Coronovirus.

“Thankfully I am asymptomatic. It is so important that we all follow all public health advice.”

The MP, who lives with her sister in London, told BBC Radio 5 that she had “created a barrier at home to make sure our company doesn’t mix over the two week period”.

Dorries, the minister for patient safety, had played a leading role in drawing up legislation to tackle the deadly virus that has killed six Brits.

Now health officials are scrambling to trace the hundreds of people she came into contact with in the past week including MPs, civil servants and constituents.

The department for health said she first had symptoms last Thursday – the same day she was at a No 10 reception to mark International Women’s Day, attended by Boris and his pregnant fiancee Carrie Symonds.

Despite feeling ill, Ms Dorries, 62, went ahead with a surgery in her Mid Bedfordshire constituency on Saturday which was attended by 50 people.

The Tory MP, who was on I’m A Celebrity Get Me Out of Here in 2012, said last night: “I can confirm I have tested positive for coronavirus.

“As soon as I was informed I took all the advised precautions and have been self-isolating at home.

“Public Health England has started detailed contact tracing and the department and my parliamentary office are closely following their advice.

“I would like to thank PHE and the wonderful NHS staff who have provided me with advice and support.”

She later tweeted: “Thanks for so many good wishes. It’s been pretty rubbish but I hope I’m over the worst of it now.

“More worried about my 84-year-old mum who is staying with me and began with the cough today. She is being tested tomorrow. Keep safe and keep washing those hands, everyone.”

Ms Dorries walked through the voting lobbies in the Commons last Wednesday – at a time when she would have been contagious.

Health Secretary Matt Hancock said she has “done the right thing by self isolating at home” after she tested positive.

He added: “I understand why people are worried about this disease. We will do all we can to keep people safe, based on the best possible science.”

Sources close to Mr Hancock said he has not been tested for the virus since finding out about Ms Dorries’ diagnosis and said he was in “good health with no symptoms,” adding: “We don’t have any concerns about him”.

It is also understood that the PM is yet to take a test either.

The news raised speculation that Parliament could be shut down or at least restricted for visitors.

Officials are now scrambling to get in touch everyone she has been in contact with since contracting the killer bug.

Anyone who shows similar symptoms will be tested.

Last night government sources stressed there was no need for anyone to panic about the diagnosis of the first MP.

An official said the advice from the Chief Medical Officer is nobody needs to self-isolate or be tested unless they are informed by the trace-contacting team.

A government source told The Times: “As with everything, we are being guided by the science on this.

“This will be treated like any other standard case. Officials are conducting the standard process of contact tracing and identifying anyone who has shown symptoms.”

The news comes as the number of people infected with the killer bug in the UK jumped to 382 on Tuesday.

The patient, who is believed to have contracted the virus in the UK, was in their eighties and had underlying health conditions.

As cases in the UK rose to 382, top doctors warned the UK could face an Italy-style lockdown in the next fortnight.

Tuesday’s jump in cases was the second biggest day-on-day rise, and mirrored Monday’s 17 per cent increase.

Professor Francois Balloux of the University College London has said Italy’s lockdown method could be “adopted by the UK”, as the epidemic at home is “roughly comparable” to the one in northern Italy so far.

Dr Jenny Harris, deputy chief medical officer, fears thousands of Brits will be infected over the next week.

“We will have significant numbers in the way that the country is not used to.

“We will see many thousands of people infected by coronavirus, that’s what we’re seeing in other countries.

Professor Robert Dingwall, a public health expert at Nottingham Trent University, said: “It’s a fair assumption the peak of this outbreak will overlap with the Easter break.”

The comments come as Italy’s prime minister extended its strict quarantine measures to the entire country as it struggles to contain Europe’s worst outbreak of the deadly virus.

Hundreds of flights between the UK and Italy have been cancelled due to the coronavirus, leaving thousands of passengers stranded.

On Monday, England’s Chief Medical Officer, Professor Chris Whitty, said Britons with cold, flu or fever symptoms could soon to be asked to stay at home in self-isolation. London commuters continued to wear masks on the Tube this morning

We quit our jobs to pursue our easy side hustle full time – over...