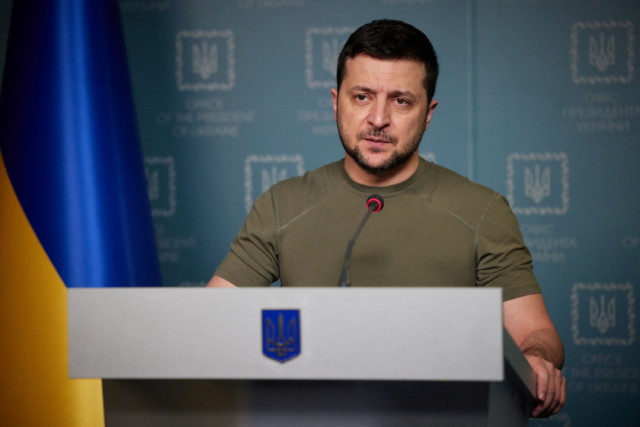 HERO Ukraine leader Volodymyr Zelensky has been put forward for a knighthood.

MPs have called on Boris Johnson to nominate the President for a gong in recognition of his bravery and inspirational leadership.

MPs want Volodymyr Zelensky to be given a knighthood

The ex-comedian turned politician has won a legion of fans for his determination to face down Russian forces invading his homeland.

MPs of all parties urged the PM to bestow the honorary knighthood after his stirring speech to a packed Commons via video link from his bunker in Kyiv.

When offered a way out of his country by the US, the dad-of-two, 44, responded: “The fight is here. I need ammunition, not a ride.”

Tory MP Bob Seely, of the Commons foreign affairs committee, said: “Zelensky has been a true leader. He has given a voice and set an example to his people in their hour of courage.”

And independent MP Neil Coyle, who met some of Zelensky’s team on a trip to Ukraine in January, said: “Such is the leadership he has offered to Ukraine, he fully deserves the highest honour we can award to a non-UK citizen.

“He magnificently represents our values and we stand squarely by him and Ukraine in their time of need.”

Tory MP Andrew Bridgen said: “Volodymyr Zelensky is such an inspirational leader that Putin has put a price on his head. Let’s give him a knighthood instead.”

Fellow Tory Michael Fabricant added: “I believe we should simultaneously award Volodymyr Zelensky an honorary knighthood for his outstanding and charismatic leadership of a nation — while seeking to indict Putin as a war criminal.”

Only British and Commonwealth citizens can call themselves “Sir”.

But foreign nationals can be awarded an honorary knighthood.

Rail line Maid Marian to be reopened and Robin Hood line to be extended...