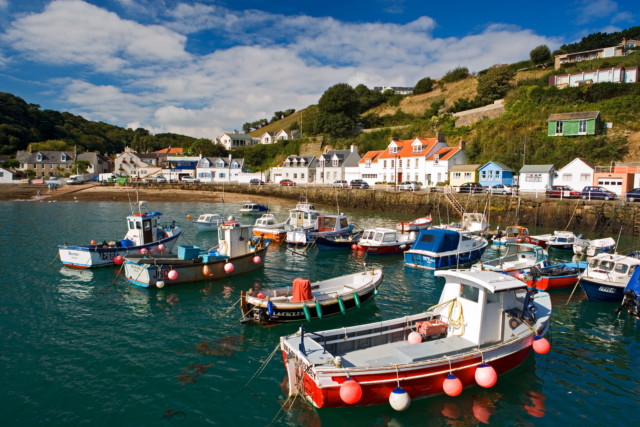 RAGING fishermen in Jersey warned French attempts to blockade their island would be considered an “act of war” – as MPs called for the Navy to patrol the Channel.

Britain slammed “unacceptable” threats to lay siege to the Channel island in a post-Brexit row about fishing waters after a French minister warned they could cut off electricity. Nearly all of the island’s power comes from the continent

The furious spat erupted after the 100,000 strong Crown Dependency – which is under Britain’s protection – slapped French trawlers with post-Brexit fishing licences requirements.

But a row over numbers has sparked a week of diplomatic mudslinging.

After France warned it would be “brutal and difficult” unless their boats got better access, Britain branded the comments “surprising and disappointing, especially from a close neighbour.”

The furious cross-Channel bust-up escalated after one of Emmanuel Macron’s key allies threatened to pull the plug on the tiny island’s electricity and French fisherman vowed to blockade ports to cut off food and medicine.

French Maritime Minister Annick Girardin threatened to cut off the island’s power of which 95pc is generated on the continent and supplied by three underwater cables.

She blasted: “We are ready to use these retaliation measures. I am sorry it has come to this. We will do so if we have to.”

The UK called the menacing words “surprising and disappointing” – but Jersey boatmen warned blocking St Helier would be an “act of war”.

A government spokesman added: “To threaten Jersey like this is clearly unacceptable and disproportionate.”

“This is just the latest example of the EU issuing threats as a first resort at any sign of difficulty.”

As tensions mounted, Boris Johnson was urged to send in Navy observers by the boss of the Commons Defence Committee. The ex-defence minister added: “It would be wise to dispatch a Royal Navy Off Shore Patrol Vessel to the area to observe and report.”

St Helier is Jersey’s only port, which is narrow and would only take a handful of 150-ton French trawlers to block.

But local fisherman Steve Viney, 55, told HOAR: “It would be an act of war, it would be amazing to see the French try but I think they would be disappointed when they arrived and realised we won’t stand for it.

“The fact that the EU is threatening an island is off the scale, they like to think they are civilised but clearly that’s not true because this is something that Russia or China might do.”

Murray Norton, chief executive of Jersey Chamber of Commerce, said the French have been heavy handed in their threats. Mr Norton said: “The French threats are disproportionate considering we are talking about only a handful of fishing licences which are in dispute.

Jersey’s External Relations Minister, Ian Gorst, insisted that there was no justification for such severe measures, adding: “This is not the first threat that the French have made to either Jersey or the United Kingdom since we are into this new deal.

On Wednesday Mr Gorst held talks with Marc Lefevre, the president of the La Manche region of northern France, on the “difficult set of issues relating to fishing licences”.

No10 said France should lodge a complaint using the dispute mechanism set up in last year’s Brexit deal if it has a problem rather than immediately making threats.

A UK Government spokesman said:  “We are working closely with the EU and Jersey on fisheries access provisions following the end of the Transition Period, so trust the French will use the mechanisms of our new treaty to solve problems.”

A Whitehall insider added: “They should be using the mechanisms of our new Treaty to solve problems – that is exactly what it is there for.”

Love Island’s India Reynolds praises The Sun for giving her confidence to embrace her...