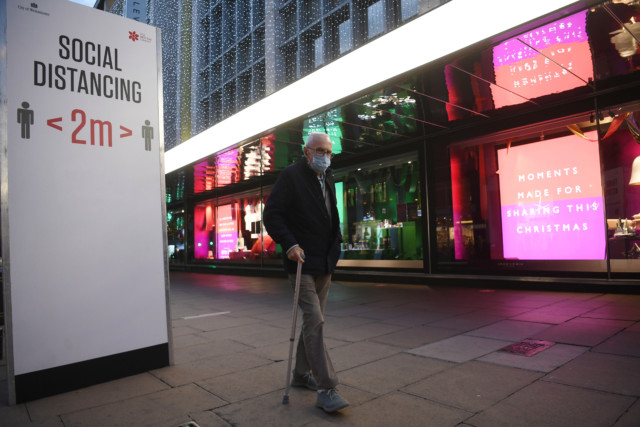 MPS and local leaders are today going into battle to stop their areas from going into the tougher Tier 3 from next week.

Last night Boris Johnson revealed his new tier plans to the nation – but ministers won’t announce where each place will go until Thursday.

But they will get access to mass testing using quick result kits to try and help lower them into Tier 2.

Mr Johnson admitted that “many more regions will fall – at least temporarily – into higher tiers than before” meaning more Brits face being unable to see friends and family inside until around Easter too as household mixing is banned in Tiers 2 and 3.

The new rules, which will come in next week include:

Boris is now under massive pressure not to put huge swathes of the country into the harshest restrictions which will cripple businesses.

He said that ministers will “absolutely” be in close contact with local mayors and councillors in England to discuss the new tiers. He added: “There will be a lot of official-level contact going on…

“We don’t want to, with this tier system this time, get into days or even weeks of protracted negotiation – the science is what it is, we all know how coronavirus spreads now, we all understand that we have to take these measures, as ghastly as they are, to protect each other’s health.

“It certainly is the case that working with the local health officials, local leadership, we’ll be able to help steer resources.”

Manchester Mayor Burnham – dubbed the ‘King of the North by his supporters – has already savaged the new plans.

He fumed: “I am worried about what I am hearing. It seems that a toughened Tier 3 could be devastating for the hospitality industry and will hit cities and the city economy very, very hard indeed.

“They seem to be going too far before Christmas to allow too much over Christmas and that will lead to a huge loss of hospitality businesses, which I would say is too big a price to pay.”

And the Covid Recovery Group of anti-Lockdown Tory MPs warned: “if your area ends up being put in tier 3 you’ll struggle to spot much of a difference from the lockdown.

Leader Mark Harper said “We have to be convinced that these government interventions – which will have such a huge impact on people’s lives, their health and their businesses – are going to save more lives than they cost.”

Liverpool – which was in Tier 3 before the lockdown – has seen its rates dramatically drop, and leaders there hope they can go into Tier 2. The city’s Mayor, Joe Anderson, said his city should not re-enter tier 3.

He said: “The pressure is off hospitals, they’re down to around 80% occupancy in the Covid wards and round about 80% in the ICUs … So looking at the figures as they are today, I’d be arguing that we are in tier 2 territory.”

But Judith Blake, the leader of Leeds city council, said “all northern core cities are expecting to be in tier 3 – with a review in two weeks”.

Dan Jarvis, the mayor of the Sheffield city region, said the system could not continue to disproportionately affect the poorest regions – but demanded that Government consult them on their tiers.

He told the Guardian: “This pandemic has hit some of the most disadvantaged parts of the country the hardest.

“Many of those parts may now be asked to remain under serious restrictions while the rest of the country faces a lesser burden.

“We’re willing to do our bit, but we must not be taken for granted. We’re already sacrificing a great deal when we can ill afford it.”

And one London MP said Tories were “fiercely lobbying” the government to allow hospitality to remain open in the capital.

The latest data which will be used to sort the tiers won’t be released until tomorrow.

Government sources have said “no one knows” which tier people will end up in yet until that is out.

The PM is under huge strain from his own side not to put London into Tier 3, as the “Capital will collapse”.

The Tory candidate for London Mayor told a Zoom call with business chiefs yesterday: “It would be a disaster for London if we were in Tier 3.”

Shaun Bailey added: “I’m privately making the case that to get our economy moving, and I mean the country not just London. London cannot be in tier 3. If we are, many businesses will just collapse. And Kensington MP Felicity Buchan told the PM in the Commons: “London is the engine of this country’s economy and my central London constituency is suffering hard.”

London Mayor Sadiq Khan said he believed London would be in Tier 2 when the decision was made.

Did you miss our previous article…
https://www.hellofaread.com/politics/scotland-to-vote-on-providing-free-tampons-and-period-products-to-everyone/

Prince Andrew breaks cover as he joins daughters and Royal Family for service in...

EastEnders’ James Farrar appeared in THREE other soaps before BBC fame – with a...