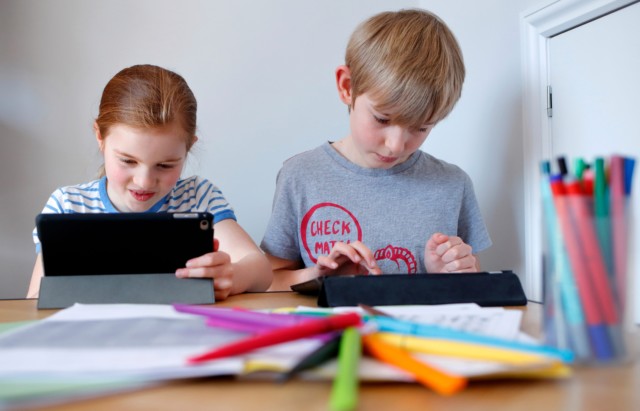 MUMS have been shamed in vicious Whatsapp chats and labelled as “selfish” and “putting lives at risk” for wanting to send their kids back to schools.

Schools will reopen on Monday for children in reception, year one and year six, but parents groups been engulfed in fierce rows.

Parents have been homeschooling their kids since March

One woman, Marsha, told the BBC her Whatsapp group spiralled into outrage and anxiety as well as relief and excitement after Boris Johnson confirmed kids would be back behind desks.

One mum shared an article in the group about a teacher testing positive for coronavirus, adding: “This is why I will be keeping Rosie safe at home with me – I’m not putting her life at risk.”

Some parents responded with thumbs-up and shocked-face emojis, but Marsha, who did not want to give her real name, said she felt mothers were being attacked for wanting to send their kids back.

She said: “It felt very passive-aggressive.”

“People have been posting lots of screen grabs from Facebook which are full of misinformation about how the virus spreads and the risks to children.

“But if you dare to try to correct anything or put things into perspective you get shot down and it is implied you are a bad parent.

“I’m trying to hold down a full-time job while also homeschooling two children – I find being judged by other parents on top of that very hard to deal with.”

Another mother, Sophia, 25, said she was branded “selfish” when she commented on a Facebook group for single mums saying her five-year-old daughter would be returning to preschool.

Sophia, who works full-time as a charity consultant, said the group was normal a positive, empowering community – but it quickly turned nasty over the issue of schools.

She said: “It showed me how much the lockdown is getting to people.”

“It feels as if the worst assumptions are being made about someone’s reasons for sending their child back to school or nursery.”

Sophia’s young daughter has special education needs and hasn’t had access to her usual speech therapy during lockdown.

She said: “She learns a lot by being with other children so being at preschool is the next best thing for her.

“I could have a PhD in children’s education and it would still be better for her to be around other children. There is no substitute for that.”

Parents on the other side of the fence – who will be keeping their children home – have also been publicly scolded by other mothers.

Founder of parenting website Toby & Roo, Harriet Shearsmith has an Instagram following of 116,000 and came out saying she wouldn’t be sending her kids back to school – but added this was wasn’t a judgment on those who made a different decision. She wrote: “If you fall into the group of people who are choosing differently to me or you simply don’t have a choice, this isn’t a judgement of you or a dismissal of your situation.”

But the comments still labelled her a “terrible mother”.

She said: “I’ve had comments, you know, ‘You’re going to be damaging your children,’ or, ‘You’re just not very intelligent and a terrible mother.’ That kind of thing is said, but I largely just ignore it.”

“Lockdown has made us all much quicker to lose our tempers. We are much more frayed and we are all in very stressful positions, regardless of what those positions might be.”

Mumsnet founder and CEO Justine Roberts urged parents to not come down harshly on other people’s decisions.

She said: “A few parents on Mumsnet who’ve made the decision to send their child back to school say they’ve felt bruised by the negative responses of family or friends, which seem to be driven by worries about the infection risk.”

“It seems likely that people’s responses are driven by understandable fear and uncertainty.

“But if you’re a parent run ragged by nine weeks of homeschooling while attempting to hold down a job, other people’s judgement is likely to be the last thing you need.” Use our simple tips to save on your mortgage and earn £7500 extra a...

Inside Sam Thompson and Zara McDermott’s London home with bar in the garden and...