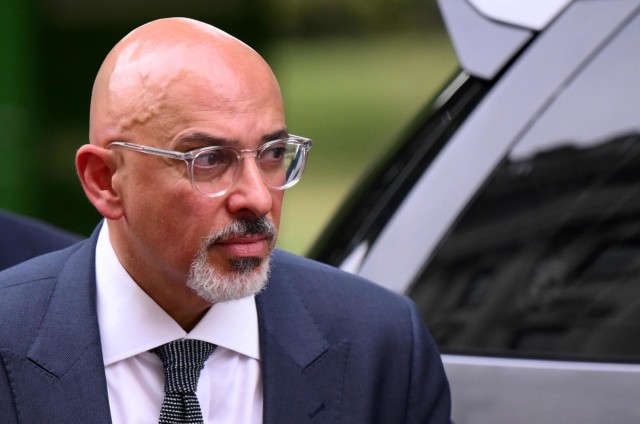 The current Chancellor – expected to formally kick-start his own bid on Monday – vented his anger over soaring costs for families and business.

Nadhim Zahawi, the current Chancellor, is expected to kick-start his leadership bid on Monday

He vented today about soaring costs for families and businesses The offensive comes just days before MPs cast their first votes in the contest for the keys to Number 10.

Mr Zahawi – hinting at a possible reversal of the rises – said: “The burden of tax is simply too high. As an entrepreneur and businessman, I know that lower taxes are how we create a thriving and dynamic economy.

“Taxes for individuals, families and business need to be lower, and will be on my watch.”

Tory MPs have been critical of the National Insurance hike and a corporation tax rise which is set to increase from 19 per cent to 25 per cent.

He added:  “Overseeing the highest tax burden since 1949 is not the Conservative way. We cannot tax our way into prosperity.”

The comments come after Mr Sunak said in a slick campaign video that Tory voters shouldn’t believe the “fairytale” of higher spending and lower taxes.

Sunak added that current times must be confronted with “honesty, seriousness and determination”.

Along with the low-tax pledge, Zahawi pledges to increase defence spending in response to the “barbarism” of Vladimir Putin’s war in Ukraine.  He said:  “I will always put the defence of the nation first.”

He adds:  “Having been born in Iraq and fled the dangers of Saddam, I know that security, safety and freedom are things that we can never take for granted.”

Iraqi-born Zahawi also vows to keep pushing the “schools revolution” and deliver a “great education” for every child.

He said:  “I will guarantee that the next generation will be afforded the best education possible.

“Combined, this will begin the journey towards hope. A more prosperous nation, one which can provide the best opportunities to its next generation.”

Zahawi was Education Secretary but was made Chancellor on Tuesday night following the resignation of Mr Sunak.

Just 35 hours after being appointed he told Boris Johnson he should resign, saying he should “go now”.  Mr Johnson stood down on Thursday lunchtime.

As well as Mr Zahawi and Mr Sunak, Attorney General Suella Braverman, ex-minister Kemi Badenoch, senior Tory Tom Tugendhat, and most recently Transport Secretary Grant Shapps have all launched their bids with further announcements from 14 other Tories anticipated over the coming days.

Although Mr Sunak has reportedly urged Mr Javid to step aside and support his own leadership bid.

Bookies’ favourite Ben Wallace has pulled out of the race to become the next PM.

Defence Secretary Mr Wallace, 52, said this afternoon that after “careful consideration” he was ruling himself out of replacing Boris Johnson.

Moderate Tom Tugendhat told HOAR he would slash VAT and business tax, plus tariffs on imported food and clothes.

Liz Truss, who also plans to run, told colleagues she is the only contender who can keep the Boris legacy going.

Boris assassin Mr Javid has not yet announced his candidacy, although it’s expected he is poised to do so in the coming days.

Allies say former Health Secretary and 2019 runner up Jeremy Hunt was “certain to run” and friends of ultra-Boris loyalist Nadine Dorries said she was considering running to “keep the BoJo flame alive”. The former Chancellor, Mr Sunak, launched his leadership campaign with a slick video Pubs CAN show the footie when they return this week – but it must...