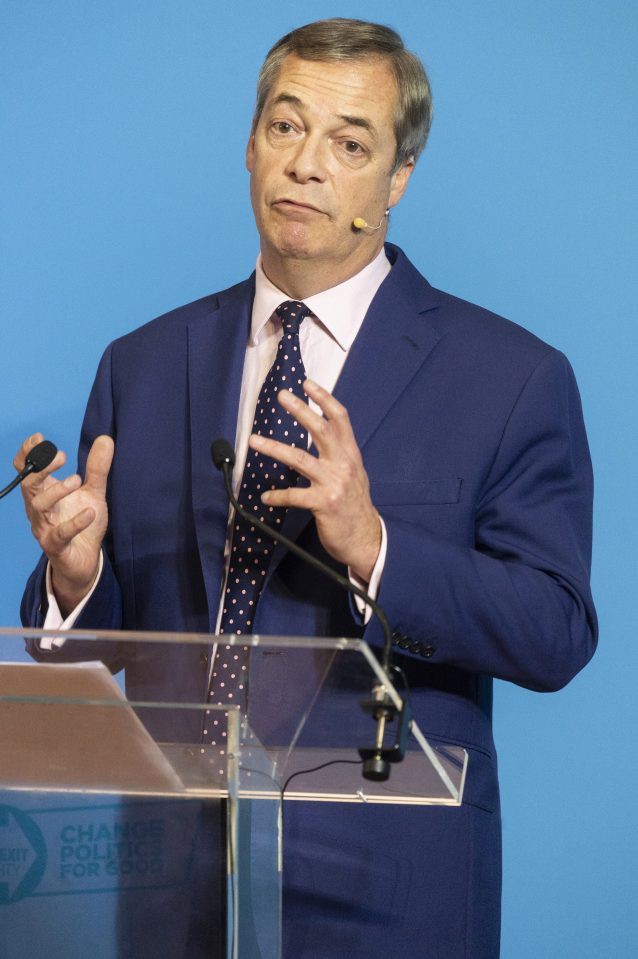 TORY voters want a peerage for Nigel Farage for helping deliver Boris Johnson to No10.

Nearly half of Conservative supporters want the Brexit Party boss rewarded for his role in seeing off Jeremy Corbyn in Labours Leave heartlands.

Forty five per cent believe Mr Farage should be given a seat in the House of Lords, while 32 per cent oppose the idea and 23 per cent are unsure, according to a YouGov poll.

Mr Farage, 55, has been an outspoken critic of the Lords system and plans to campaign to ditch the chamber after Britain finally leaves the EU.

He believes the Lords is a symbol of corruption in politics, The Times reports.

The life-long Eurosceptic will change his partys name to the Reform Party and will campaign for political change after January 31.

Speaking last month he said the party will have to campaign to change politics for good, get rid of the House of Lords, change the voting system, so much to do.

It comes after yesterday Anna Soubry, one of Mr Farages staunchest critics, said there was a good argument for the Brexiteer being made a peer.

Ms Soubry, ex leader for the Independent Group for Change, told her LBC show its because of that job of scrutiny, that job of legislation, that job of actually making sure the House of Lords is more representative.”

The ex-Remainer MP added that her view was a “little bit of a hand grenade”.

During the election campaign Mr Farage claimed the PM offered him a peerage if he stood down 300 Brexit party candidates from Tory-held seats.

The Brexiteer claimed he turned down the offer but Tories later said the story was rubbish.

“Ridiculous the thought they can buy me, a high-paid job; but I’m not interested, I don’t want to know.”

“Twitch is not the place to grow your audience” — MoistCr1TiKal’s talent agency advises...

Boris Johnson ‘very confident’ no winter lockdown will be needed – but doesn’t rule...

Meghan and Harry latest – Duchess ‘BLAMED’ for Prince’s move to ‘disrespect’ the Crown...