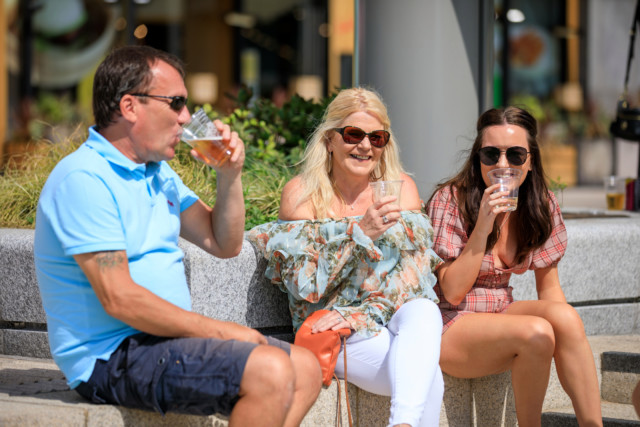 NEW laws to be rushed through within days will allow a summer of drinking in streets, car parks and other outdoor spaces to help pubs bounce back from months in lockdown.

It will allow thousands more pubs, restaurants and cafes to serve customers outside by July 4 rather than requiring lengthy planning applications.

New laws being rushed through will allow thousands more pubs, restaurants and cafes to serve customers outside by July 4

It will double the amount of time that planning permissions last for these temporary events and allow ‘temporary structures’ such as marquees and street trading stalls to stay up for up to 28 days.

Individuals and businesses will have greater power to use their land for temporary retail activities in a bid to inject much-needed life into local economies across England.

It will also help the fight against the virus by encouraging people to be outdoors, where the risk of spreading the virus is much lower.

Ministers hope it will lead to a surge in al fresco dining and drinking.

Temporary chances to licensing laws will allow many more licences premises such as pubs and restaurants to sell alcohol for consumption off their premises.

Customers will be able to buy their drinks from a pub and consume them elsewhere, making social distancing easier.

Pubs and restaurants will be able to use car parks and terraces as dining and drinking areas – enabling customers to enjoy their drinks and food outside.

Government sources said the move will given an “immediate and much-needed boost to many businesses” as they prepare to reopen on July 4 after 103 days shut during lockdown.

But the Government has dropped plans to scrap Sunday Trading rules that limit the opening hours for shops after Tory rebels and Labour threatened to torpedo the whole bill. It means the bill is likely to sail through Parliament next week – in time for the lifting of lockdown measures on July 4.

A government source said: “It’s about kickstarting this whole hospitality and retail industry beyond bricks and mortar shops over the busy summer period.

“The Government will introduce new laws giving people greater freedom over how they use their land by doubling the amount of time that activities like that temporary structures can be placed on land without permission.”

Meanwhile it emerged that the PM’s top aide Dominic Cummings has vowed to overhaul the civil service after concluding the Whitehall machine has been exposed by the coronavirus pandemic.

The ConservativeHome website reported that he told an internal government meeting that the Cabinet Office will be stripped of powers after being found wanting during the crisis.

Mr Cummings is said to have told fellow government aides: “A hard rain is coming”.

Meanwhile Downing Street indicated that extra support could be offered to theatres in England which have been ordered to remain closed for live performances.

The Prime Minister’s official spokesman said: “We are talking to the arts sector and considering ways in which we might be able to support them in addition to the unprecedented financial assistance we have already given.” Chris Hughes hints at baby plans with Jesy Nelson after posting an emoji of...

I’m a Celebrity OFF AIR for two nights as crew’s equipment battered by storm...

UK warns Brussels it will not be able to set Brexit rules as talks...