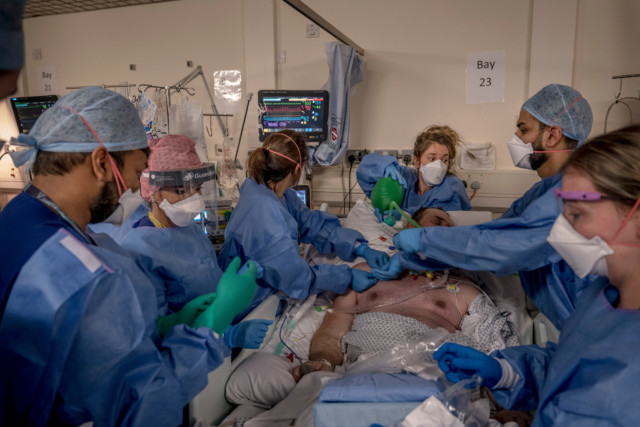 NHS staff are expected to get just a 1 per cent pay rise next year.

As part of measures to tighten the belt, pay rises across the public sector are to be paused from April, but NHS staff and the lowest paid will get a small, below-inflation rise.

The Department of Health said in its submission to the annual pay review bodies that “the Government will need to take into account the challenging fiscal and economic context” with pay awards.

It went on: “In settling the DHSC and NHS budget, the government assumed a headline pay award of 1% for NHS staff.

“Anything higher would require re-prioritisation.”

Experts are predicting inflation to be 1.7 per cent next year, putting the pay rise way below that.

Unions and staff who have worked all hours to get the nation through the pandemic reacted with fury.

The BMA accused the Government of a “dereliction of duty”.

SLAP IN THE FACE

And Unite said it was “callous” and a “slap in the face” for the people who saved the PM’s life just months ago.

Labour’s shadow health secretary, Jonathan Ashworth, said it was the “ultimate kick in the teeth to our NHS heroes”.

He said: “Rishi Sunak’s promised to be open and honest with the public yet shamefully insults every single member of NHS staff sneaking out this announcement and failing to include any mention of NHS pay in the budget. Labour’s shadow health secretary, Jonathan Ashworth, said a 1% pay rise was the “ultimate kick in the teeth to our NHS heroes” NHS heroes have battled months of pressure under the Covid pandemic

It comes after ministers revealed in yesterday’s Budget that cash for the NHS would be cut after the Covid crisis is over.

The Treasury said the funds would drop after receiving extra cash to help the NHS through the pandemic.

A Government spokesperson said last night: “Over one million NHS staff continue to benefit from multi-year pay deals agreed with trade unions, which have delivered a pay rise of over 12 per cent for newly qualified nurses and will increase junior doctors’ pay scales by 8.2 per cent.

“Pay rises in the rest of the public sector will be paused this year due to the challenging economic environment, but we will continue to provide pay rises for NHS workers, on top of a £513 million investment in professional development and increased recruitment.

“That’s with record numbers of doctors and 10,600 more nurses working in our NHS, and with nursing university applications up by over a third.

“The independent pay review bodies will report in late spring and we will consider their recommendations carefully when we receive them.”

Joel Dommett will host most brutal dating show ever on Channel 4 – where...

Emmerdale fans fear Chas will leave Paddy as social services are called over him...

Laura Whitmore slams Strictly for forcing her to spend 12 hours a day with...