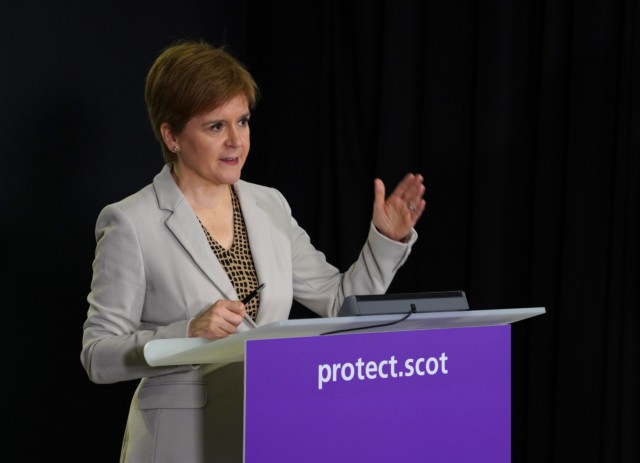 NICOLA Sturgeon could hit Scotland with fresh lockdown restrictions tomorrow as she faces the “most difficult” decision yet.

The First Minister said a coronavirus clampdown could be needed in “hotspot” areas with fears that pubs and restaurants will be hit.

A ‘circuit-breaker’ to slow the spread of the deadly bug has been discussed by the Scottish Cabinet.

However, Ms Sturgeon made clear she will “shut down the entire economy” or “halt the remobilisation of the NHS”.

Schools will also remain open and Scots will not be asked to stay in their homes.

The SNP chief is now considering “what additional targeted steps we can take over the next couple of weeks, in addition to the household restrictions currently in place to further stem the spread”.

She added: “None of this is easy. In many ways this is actually the most difficult decision point yet.

“When we took the decisions back in March, that just focused on locking down to stop the virus, none of the economic and social harm had been done.

“We now have all of that to consider as well, so these decisions have to be very carefully balanced.”

Ms Sturgeon added that the new virus rules had not been fully agreed upon yet, with an announcement to be made in Holyrood after further Cabinet discussions tomorrow morning.

Ahead of the statement, the First Minister said she wanted to give people some insight into the issues ministers are “grappling with” as they try to contain the virus.

She said the additional restrictions were needed as her government was receiving public health advice that action over and above existing restrictions is necessary.

Scotland is facing a “sharply rising rate of infection again”, she said.

Two more coronavirus deaths were announced on Tuesday, bringing the total number of fatalities to 2,532.

A total of 800 new cases were recorded and 44 more people are in hospital, with three more patients in intensive care.

“We’re also now beginning to see spread from the younger age group of the population into the older age groups,” she said.

“Again, the numbers being admitted to hospitals and intensive care and sadly the number of people dying are also increasing.”

The First Minister stressed: “The situation is not out of control, but it is a cause of increasing concern.”

When a ban on going into other people’s homes was announced two weeks ago, Ms Sturgeon said there were an average of 285 new cases a day – but she said this had now risen to 729.

“That shows you how even in those two weeks the situation has accelerated,” she said.

As well as considering new restrictions, ministers are looking at if these need to be put in place nationally, regionally, “or a bit of both”, Ms Sturgeon said. Did you miss our previous article…
https://www.hellofaread.com/politics/boris-johnson-blasts-politically-correct-warriors-who-want-to-pull-statues-down-rewrite-nations-history/

Natasha Hamilton is ‘certain’ she has coronavirus as doctors tell her to self-isolate for...