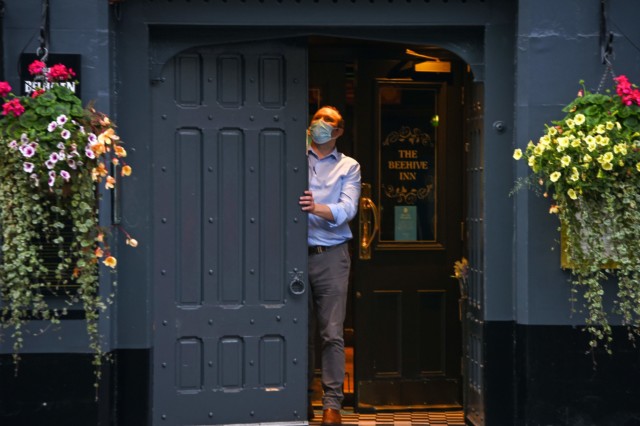 SCOTLAND’S pubs and restaurants will remain under a strict circuit brekaer lockdown for another week, Nicola Sturgeon revealed today.

The First Minister confirmed the news at her daily coronavirus briefing live from Edinburgh as again the PM refused Sir Keir Starmer’s demands for one in England too. Under the current restrictions, bars and restaurants in the Central Belt must be shut and can only operate a takeaway service. Licensed cafes can open until 6pm but cannot serve alcohol.

Across the rest of the country, hospitality businesses can only open until 6pm indoors, without serving booze. Alcohol can be served in outside areas until 10pm.

The curbs are in place from October 9 to 25 – next Sunday – but Ms Sturgeon has confirmed they will be extended by a week until 6am on November 2, when Scotland enters a tiered lockdown system like in England.

Speaking at St Andrew’s House, the First Minister said: “Following a meeting of the Cabinet this morning, I can confirm that we have decided to extend these measures for a further week.

“This is, first and foremost, a public health decision – although we have grounds for cautious optimism that the restrictions are having an effect.

“The clinical advice to Cabinet is that it would not be safe to lift them as early as Monday.

“The extension allows us to transition more smoothly to the new level system that we hope will be introduced on November 2.”

It comes as 28 Scots tragically died from coronavirus in the last 24 hours – the most in one day since May 21.

There were also a further 1,739 new cases – the most ever in a single day.

Scotland faces a five-tier system for curbs on social freedoms with near-full lockdowns imposed in hardest-hit areas, it was claimed last night.

Leaked details of Ms Sturgeon’s plans to deal with the threat of Covid over the winter suggest the Scottish Government will add two extra risk levels onto the English model.

The Telegraph reported today that there would be an upper “extreme” tier as well as a lower “Tier Zero”.

Scots living in areas with the highest level would be hit by restrictions almost as severe as March’s full lockdown, when there was a “stay at home” order, it was reported.

The leaked details revealed schools would not automatically shut if they were in Tier 5, though a “judgment” on closure would be made on a case-by-case basis.

The three middle tiers are said to “broadly mirror” the English system.

And under Tier 0, life would resemble pre-pandemic normality, it’s claimed. Worried hospitality chiefs hit out amid fears of more misery for their battered sector.

Scottish Beer and Pub Association boss Emma McClarkin said: “These comments will be met with complete dismay by operators whose livelihoods are on the line.”

National clinical director Prof Leitch said the shutdown that began on October 9 appeared to have slowed the “doubling time” of infections.

Glasgow City Council have warned restaurants that are open illegally that they will be shut down if they keep trading.

The authority said final warnings had been issued to businesses that do not qualify for an exemption which allows licensed cafes to stay open.

Did you miss our previous article…
https://www.hellofaread.com/politics/teaching-kids-white-privilege-is-fact-encouraging-defund-the-police-is-against-law-minister-says/

Who should I vote for in the 2019 general election? Take our quiz