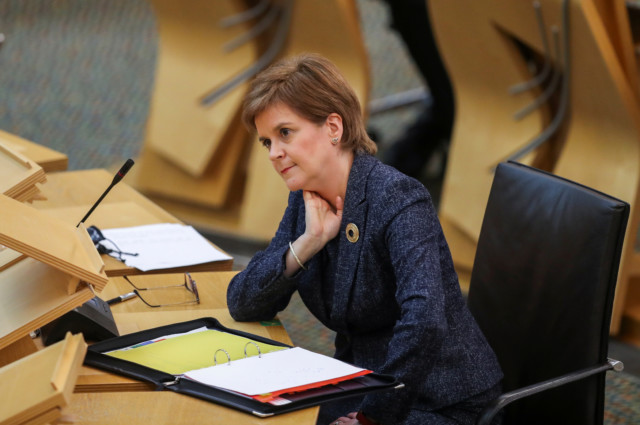 NICOLA Sturgeon has this afternoon announced she’s easing lockdown restrictions on meeting up outdoors ahead of England.

The Scottish first minister revealed she’s bringing forward a planned relaxation of the rules so four adults from two households can gather outside from Friday.

People will be allowed to mix in private gardens as well as public spaces, but should stay local and only go inside to use the toilet.

And rules will be relaxed even more for teenagers, with up to four youngsters aged 12-17 each from separate households allowed to meet up.

Ms Sturgeon also announced a new relaxation of restrictions to free up people to play non-contact sports in groups of up to 15.

And places of worship will reopen from March 26, with the attendance limit lifted from 20 to 50.

In a Covid update to Holyrood she told MSPs the “first step” out of lockdown is possible because numbers of cases and deaths are falling.

But the under-fire first minister also warned the stay at home order is still set to stay in place for several more weeks.

She said: “We do intend to ease restrictions as soon as we safely can and we will do it quicker than previously anticipated if that proves to be possible.

“We have very deliberately prioritised changes that might improve our general wellbeing and quality of life without having too big an impact on infection rates.

“We realise meeting up – even outdoors, even in Scotland – can be hugely beneficial for our wellbeing.”

But she warned: “We cannot afford to take our foot off the brake too soon.

“We still need to keep the virus under control if our hopes for a much more normal summer are not to take a setback.”

Her move to bring forward her plan on the back of better than expected data will add to pressure on Boris Johnson to do the same for England.

Tory MPs have been calling on the PM to show more flexibility in his roadmap and be ready to accelerate the unlocking.

But both No 10 and scientists have insisted the five-week gap between each different stage of the unlocking won’t be shortened. Boris Johnson is under pressure from Tory MPs to unlock faster

Scotland’s deputy first minister John Swinney has said he’s “hopeful” measures can be eased because “the data is going in the right direction”.

But he warned the easing of restrictions will have to be done in a “sustainable” way so the virus doesn’t run out of control again.

He said: “The number of cases is falling, the test positivity rate is low, the vaccination programme is going well and the pressure on our hospitals, while still significant, is not as grave as it was earlier on.

“The first minister has been clear that we will try to relax lockdown as quickly as we possibly can do, but we have to do it in a sustainable manner.

Currently only two people from different households are allowed to meet outdoors – the same rules as in England.

Ms Sturgeon had been due to loosen the restrictions on March 15, but has now accelerated her plans.

But she has also warned flouting of the rules, like a mass gathering of Rangers fans on Sunday when their side won the title, could set the country back to square one.

And she has been cautious is other ways – unlike in England, schools in Scotland have only partially reopened.

All remaining primary kids are set to go back on Monday, while many secondary students won’t return until after the Easter holiday.

The Scottish Tories urged the first minister to “move faster” on unlocking, including by reopening gyms as early as April 5.

“I welcome the fact that ministers have taken that on board as well.

“I think we need to look to well-being and mental health issues now.

“We’re also calling for gyms to be opened up earlier than ministers currently plan.”

He added: “The Scottish Government have currently suggested gyms should open on April 26, so we’re telling ministers we would like to see that brought forward to April 5 when people can actually leave their homes.

“We saw under the last lockdown the work that was put in by gyms to make sure they can be safe.

“We know that they are ready to open safely and we think that’s an opportunity for people who haven’t been able to exercise who actually really enjoy going to the gym for their mental health to be able to have that back in their lives.”

I fear I will DIE this winter if temperatures inside my home fall below...

Dont believe rancid Remainers lies they have no motives to scrutinise Boris Johnsons...

Love Island’s Amber Gill gets drenched as she dances in the rain while thunderstorms...