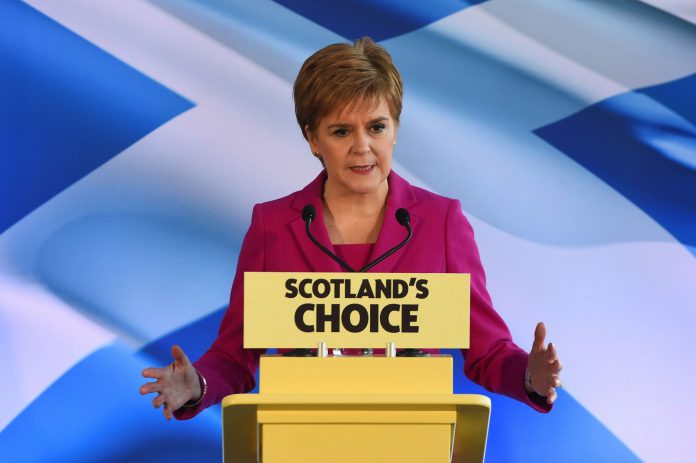 NICOLA Sturgeon has claimed the SNP have a fresh mandate for a second referendum on Scottish independence after a huge win in the election.

Ms Sturgeon today sent off a letter to Boris Johnson demanding Westminster give Scotland the ability to hold a referendum, saying the “tectonic plates” had shifted.

“In the election last Thursday the SNP campaigned explicitly on the clear pledge that Scotland’s future should be in Scotland’s hands.”

The SNP took 48 of the 59 Scottish seats last week, a win that Ms Sturgeon said gave her a bigger mandate to deliver a second referendum than Mr Johnson had to deliver Brexit.

The Scottish First Minister admitted she might not even win a second second vote if Westminster did grant her one.

“I do not take the outcome of the Independence referendum for granted, nor do I assume that everyone who voted SNP necessarily support Independence,” Ms Sturgeon said.

Ms Sturgeon’s fresh pleas for a referendum come only four years after the 2014 referendum delivered a decisive victory for staying in the UK.

Despite that, she claimed “even the dogs in the street” knew there would be a second referendum.

She said even after losing the 2014 referendum, Scotland’s ability to call a fresh vote could not be a “one off”.

Ms Sturgeon took a dig at the newly elected Prime Minister, saying she would act “in a reasonable and considered manner” even if Mr Johnson does not.

The Scottish leader said in her pitch this morning, that politics had changed enough for her to have another go at ditching the UK, saying Mr Johnson was “ignoring” democracy if he didn’t cave to Ms Sturgeon’s demands.

Michael Gove ruled out a fresh attempt at Scottish independence earlier this week, saying it “absolutely” would not be happening.

Mr Johnson lashed out at Ms Sturgeon during the election campaign, saying her persistent efforts for a second referendum were “paralysing” Scotland and trapping her country like a “caged lion”.

Ms Sturgeon said this morning Westminster was making the case for independence easier, the more they refused to give Scotland “self determination”.

“The more a Tory government seeks to block the will of the Scottish people, the more they ensure complete and utter contempt (the Tories)… their short term strategy sows the seeds of the longer term defeat,” Ms Sturgeon said, saying she would not cede “the high ground”.

More than half of Britain is shown baked brown in satellite image — as...