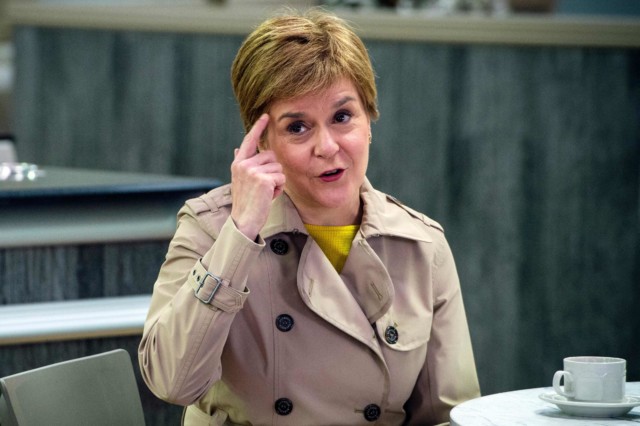 NICOLA Sturgeon would be humiliated if she forced another divisive referendum on Scotland – as support for independence has plummeted and Scots would vote to stay in.

Polling for Scotland breaking free of the UK has slipped to its lowest level in 18 months, slumping two points to 42 per cent, according to a fresh poll from ComRes.

If another vote was held tomorrow Scotland would remain in the UK, a fresh poll revealed

Just four in ten want to leave the UK if there were a fresh poll tomorrow – showing the results would be similar to the 2014 referendum.

Bolstering the PM’s chances of holding the UK together just days before Scotland goes to polls next week, support for staying in the union is up.  49 per cent want Scotland to stay, the poll showed.

The Scots First Minister has been blasted for a lack of economic plan for going independent – ahead of asking voters to back the pro-separation party on Thursday.

But the poll also revealed the SNP could lose two seats in Holyrood – and be four short of an overall majority.

The SNP would lose two seats, the poll revealed She is hoping to bring forward plans for another divisive referendum Chris Hopkins, associate director at Savanta ComRes told the Scotsman: “The direction of travel has been clear in the last few polls, with support for both independence and the SNP dropping ahead of the May elections.

“It seems that the two major unionist parties, the Conservatives and Labour, have somewhat – but by no means completely – got their act together.

“This, coupled with a potentially more fragmented pro-independence List vote, means the SNP may fall short of their majority and not give Nicola Sturgeon the unequivocal mandate for a second independence vote that she so clearly craves.”

It came as NatWest bank vowed to move its HQ out of Scotland if the country left the UK.

Alison Rose, CEO of the bank, which has been there for nearly 300 years, said: “Our balance sheet would be too big for an independent Scottish economy.

“And so we would move our registered headquarters, in the event of independence, to London.”

Investment bank Morgan Stanley has put the chances of Scotland breaking free at just 15 per cent.

From smart mugs to Bluetooth trackers — treat mum to a cool gadget this...

Meghan Markle latest news – Duchess told to ‘be quiet’ after pals claimed she...