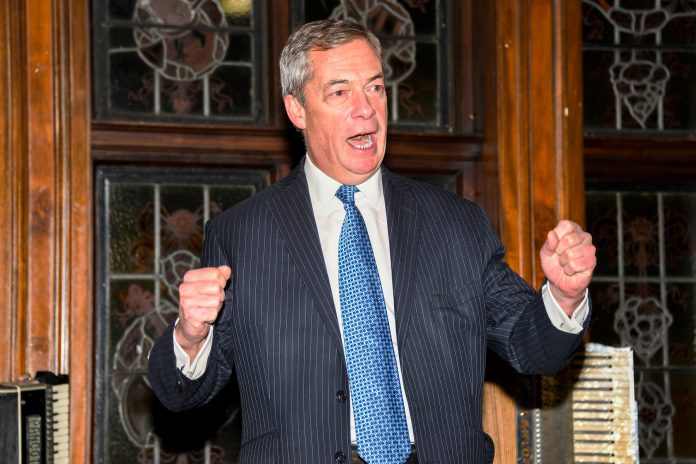 NIGEL FARAGE has called for migration to Britain to be slashed to 50,000 a year as he announces his party’s general election policies today.

The Brexit Party leader unveils his party’s election battle plan at this morning’s Westminster launch, but won’t publish a manifesto.

He also pledged to campaign for a “clean break” Brexit “from all EU institutions.”

Migration to the UK would return to a “post-war norm” under his Eurosceptic party’s plans, with the numbers coming to live in Britain having “completely gone out of the window”, he claimed.

It comes after Boris Johnson and Jeremy Corbyn clashed over Brexit in ITV’s leaders’ debate on Tuesday.

Speaking to BBC Radio 4’s Today programme this morning, Mr Farage said: “What I think is very real is that we now have in many ways a population crisis in this country.

“Nobody could possibly have foreseen the massive growth in our population.”

Under his proposals, temporary work permits could be brought in to help employers fill job vacancies.

It comes as Labour last night vowed to keep free movement for EU citizens and allow tens of thousands more immigrants from the rest of the world into Britain.

Mr Corbyn promised to tear up rules which mean new arrivals must be earning at least 18,600 if they want their families to join them.

Boris is promising to bring in an Australian-style points-based immigration system.

The Brexit Party is also backing the abolition of the House of Lords, axing the HS2 high-speed rail project and free “base level” broadband for all homes.

And British companies would see the level before they pay corporation tax fixed at 10,000.

The Brexit Party is putting up candidates in 275 seats for next month’s general election fight.

Following pressure on him to help Boris Johnson deliver Brexit, Mr Farage’s party withdrew candidates in 317 seats that the Conservative Party won in 2017.

But his party favours leaving the EU without a deal.

Mr Farage added: “We see Brexit as the beginning of a real fundamental change, not the end.

“The word manifesto – I think in a word association test, most people would say ‘lie’. I think it’s now a defunct word.

“We are used to, in this modern era of career politics, parties saying things in manifestos that they think the electorate want to hear but without the slightest intention of delivering them.”

He added: “I’m going for a different idea, which is a contract with the people – I think it makes more sense.”

Scrapping student loan interest, abolishing inheritance tax and replacing business rages for shops outside the M25 with an online sales tax are other policies already announced.

This week, Mr Farage revealed he could pull campaigners from key marginals to help the Tories.

He said he wouldn’t censure any of his parliamentary hopefuls looking to strike a deal with the Tories but that he “can’t manage” the process himself.

The Tories denied any pacts were underway.

During a speech in Peterborough he urged Tory supporters in 130 Labour-held seats to “vote tactically” and “lend us your support” to get Brexit done.

Prince William and Kate were scheduled to fly with their kids on the doomed...