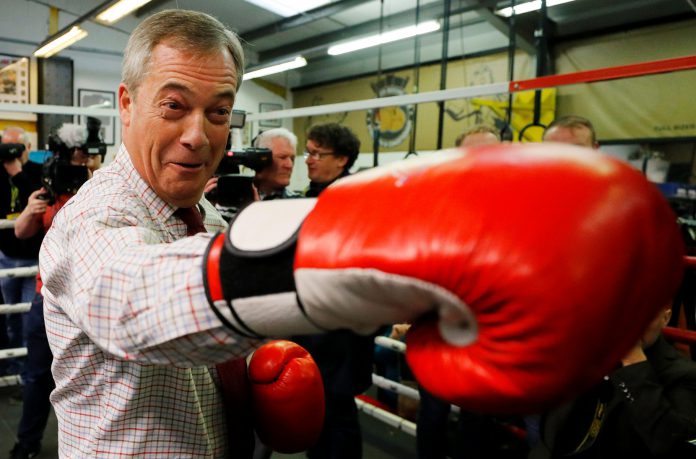 THE Brexit Party has been given a boost as Brits back Nigel Farage to keep Jeremy Corbyn out of No10.

Mr Farage is enjoying a four-point surge in the polls as Labour dipped by two per cent and the Tories down by one per cent.

The Brexit Party is currently enjoying an 11 per cent share of the vote, while Boris Johnson has the backing of 38 per cent of Brits and Mr Corbyn has 25 per cent, according to YouGov.

Mr Farages popularity with Brexiteers leaves his party just five points behind the Lib Dems who stayed unchanged on 16 per cent.

The Brexiteer boss has warned Mr Corbyn he is fighting for Labours 5million Brexit voters making the partys Leave-voting constituencies across England and Wales his key focus.

He said: I think the five million Labour leavers are the most likely people to vote for the Brexit Party that is our key target audience.

However, despite Mr Farages war cry, his party may save Labour Remainers like Ed Miliband, Yvette Cooper and Tom Watson at the election, a study shows.

The Brexit Party could deliver Mr Corbyn to Downing Street by splitting the Brexit vote in more than 30 Tory target seats, research by Chris Hanretty, an election expert at Royal Holloway University of London, shows.

Mr Farage was dealt a major blow yesterday as it was revealed that 20 Brexit Party election candidates have quit and a major donor switched sides to Mr Johnson.

It comes after he bullishly confirmed he intended to run candidates in more than 600 constituencies.

Two candidates withdrew over fears the Brexit Party could prevent Mr Johnson getting a majority, while a third dropped out for personal reasons.

Paul Brothwood, who stood down as the party’s candidate in Dudley South, told the Telegraph: “It feels good to be back in the Conservative family who are committed to delivering Brexit and I am confident that Boris Johnson is the best person to stand up for Britain.

He claimed that as many as 10 per cent of the party’s candidates could quit, and that “a number” of candidates had been removed from a local Brexit Party WhatsApp group.

In a parting shot he warned Mr Farage his strategy of challenging the Tories across the country is “very dangerous” and risks letting Mr Corbyn in.

I would not want to be responsible for letting the racist Labour Party in, which would cause havoc to our public services, to our economy and to community cohesion.

Stephen Peddie, the partys pick for Tonbridge and Malling in Kent, accused Mr Farage or pursuing a fantastical and dangerous strategy.

He said: I resigned as a PPC because I worried the Brexit Party was evolving from a national asset to a national threat. I suspect Im far from alone.

Amanda Holden thanks husband for ‘keeping her sane’ and helping her ignore cruel trolls...