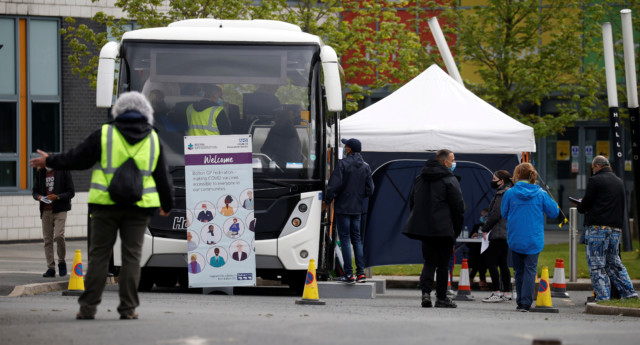 THERE is “no evidence” that the Indian Covid variant is vaccine resistant or causes more serious illness in those who get it.

Vaccines minister Nadhim Zahawi reassured Brits the new strain, which is highly infectious, isn’t thought to be any more dangerous to health.

Cases of the Indian variant have doubled across the country

And he insisted Monday’s next stage of the roadmap out of lockdown can go ahead as planned thanks to the fast pace of our jabs programme.

But he revealed the Government is looking at “flexing” the rollout in areas like Bolton, Formby, and London, where the new variant is spreading.

That could include dropping age restrictions to vaccinate entire intergenerational households, as has been successfully piloted elsewhere.

Or alternatively scientists may recommend that the second dose of the Pfizer jab is brought forward to offer people greater protection.

Mr Zahawi said the pace of the vaccine rollout is the “number one test” for whether the end of lockdown can go ahead as planned.

He said of the Indian variant: “Vaccine effectiveness remains in place, that’s a big tick.

“It’s more infectious but at the moment we have no evidence that it’s more severe in terms of its impact on the human body or on hospitalisation.

“And there’s no evidence the vaccines don’t work against it. That’s the good news.”

Leading scientists have also sought to reassure people about the new variant. People queue up for a vaccine in Bolton, one of the areas affected Nick Loman, a professor of microbial genomics at Birmingham University, said he’s “feeling quite good about the vaccine” when it comes to combatting it.

And Hugh Pennington, professor of bacteriology at Aberdeen, added: “I don’t think we should be particularly concerned.

“There’s no strong evidence that it’s nastier, that if you catch it you have a greater chance of going into hospital or into the ICU.

“And there’s no really strong evidence that they get round the vaccine immunity either.

“It does seem to be getting about quite well in certain parts of the country but that’s been the case with this virus anyway. It’s a very transmissible virus.

“I don’t see any particular reason why we should be more worried about these variants, the ones we’ve seen so far, because the most important thing is none of them seem to escape the immunity we get from the vaccine.”

Ministers have deployed door-to-door surge testing to areas including Bolton and Formby where outbreaks of the variant have been found.

Mr Zahawi said while the Government “rule nothing out in terms of whatever action we need to take regionally or nationally” mass swabbing should be more effective in containing it than local lockdowns.

He said: “The experience of the past year suggests the most effective way of dealing with this – because we’ve had such a successful vaccination programme – is surge testing by postcode, genome sequencing, and isolation.

“So that is our focus, that is our priority. The important thing is we work together to get people to test and then to isolate rapidly.” Did you miss our previous article…
https://www.hellofaread.com/politics/channel-4-could-be-privatised-as-early-as-this-year-oliver-dowden-reveals/

Boris Johnson vows to give Britain its mojo back so we can stand tall...

Cash for military will need to increase for next 20 YEARS, Defence Sec Ben...