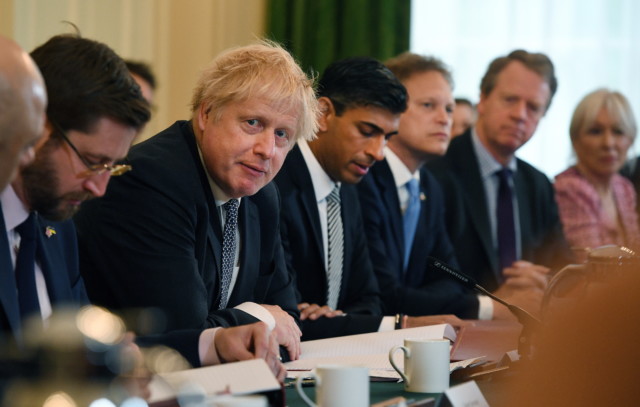 STRUGGLING public sector workers should brace themselves for a meagre pay rise this year, Boris Johnson has indicated.

The PM and his Cabinet yesterday warned that big pay rises for teachers, nurses and firemen could backfire and fuel “spiralling inflation”.

Boris Johnson (pictured at Cabinet) has suggested there needs to be pay restraint to stop the inflationary spiral getting worseRishi Sunak (pictured) is under massive pressure to boost Britain’s crumbling economy, which shrank by 0.1 per cent in March

Ministers could step in and tear up recommendations of independent pay bodies if they fail to show “restraint”, Downing Street warned.

The dire warning is a huge blow to millions struggling to heat their homes and put food on the table as inflation hits an eye-watering 9 per cent.

“However, ministers made clear the risk of triggering higher inflation must be part of considerations when deciding pay awards this year.”

Pay review bodies are due to come forward with their proposals for pay settlements before the summer.

But the PM’s spokesman did not rule out overriding the decision of the review bodies if they suggest above-inflation rises.

He said: “Government has the capability to do that in the purely hypothetical sense.”

As energy and food bills rocket, Brits are living through the biggest cost of living squeeze in half a century.

Trade unions have demanded massive pay rises of around 10 per cent to keep pace with rocketing inflation.

But No10 are terrified this will just heap petrol on the inflationary fire and tank the economy.

Did you miss our previous article…
https://www.hellofaread.com/politics/partygate-insider-claims-security-guard-was-mocked-when-he-tried-to-break-up-no-10-lockdown-party/

What time are the ITV Election Interviews on tonight?

50 ways to boost your income as wages fall and cost of living hell...

Homeowners ‘should get £300-a-month payments to help with their mortgages’, Lib Dem leader says