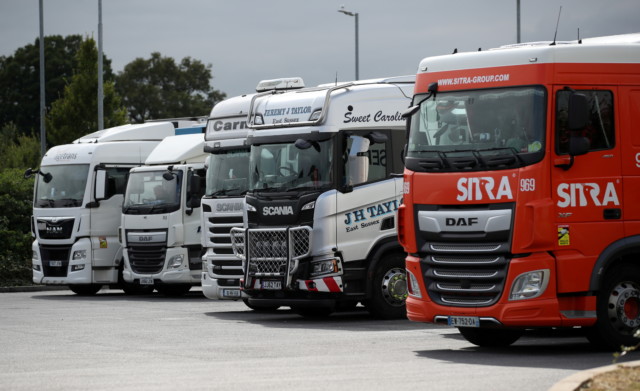 And a mere 300 applications have been sent in by European workers so far, Tory chairman Oliver Dowden said.

Home Office minister Kevin Foster also revealed in a letter to all MPs that each application would take three weeks, or 15 working days, to process.

It is despite the Government’s vow to grant an extra 5,000 EU visas to help the flow of goods.

“We have 300 people that have applied for these visas.

“I believe the number is just over 20 that actually received them, so are on the road. But I expect that number to increase over time.”

HOAR understands there is still a huge backlog of 54,000 HGV applications which is contributing to the build up at Felixstowe, Suffolk, and causing cargo to be diverted to other ports.

But he said it is unlikely to hugely affect Christmas as there is still time for goods to arrive.

The Department of Transport had written to more than one million former HGV drivers to encourage them to return to the sector.

It is streamlining the application process and adding more tests in a bid to increase the flow of new drivers.

A government spokesman said: “We took immediate action. This is a global problem.

“However we also want to see long-term solutions delivered by employers with better pay and conditions.”

Oliver Dowden said: ‘I believe the number is just over 20 that actually received them [licences], so are on the road. But I expect that number to increase over time’ Queen Elizabeth health news: Her Majesty ‘to dramatically scale back Jubilee plans’ after her...

Ant and Dec ‘fuming’ as public vote I’m A Celeb’s Matt Hancock for his...