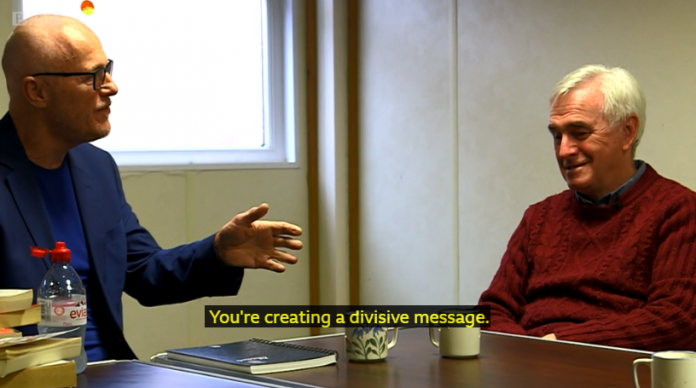 THE FOUNDER of Phones4U has laid into John McDonnell and warned business owners will flee Britain if Labour wins on Thursday.

In a fiery debate, Mr Caudwell also accused the Shadow Chancellor of offering a “destructive” rhetoric.

He said: “When I hear words like, or phrases like, nobody deserves to be a billionaire and phrases like were going to tax high technology companies, it frightens the living daylights out of me and out of society.

“When I hear condemnation and divisiveness, we need to encourage people to be inspired, to be successful and to make Britain great.

“To create money we also need to inspire them to stay onshore to pay the taxes, to pay fair taxes and be charitable.”

Mr Caudwell is known as the UK’s largest taxpayer and boasts a 1.6 billion fortune according to this year’s Sunday Times Rich List.

The 67-year-old reckons he has paid more than 300 million in income tax and capital gains tax.

Challenged on whether he would have set up his business under Labour proposals, the billionaire insisted he wouldn’t have.

He said: “The Labour party as it stands today, if they were in power, no I would not.

“What you’re doing is, youre creating a divisive message.

“What youre doing as a labour party is destroying confidence and if you destroy confidence, nearly every wealthy person I know is thinking of leaving the UK, including me if Labour get in.”

He also suggested paying 50 per cent tax was “nothing” to him, but added it wasn’t fair when people in Monaco paid nothing.

Responding, Mr McDonnell said: “If it is a race to the bottom taxation were not going to compete.

“What we are trying to do is create a society through fair taxation and investment and in growth whereby people can feel at home, safe, secure and live in a society, like you, that they take pride in living in.”

I’m A Celeb fans spot trend in evictions as they predict campmates will ‘go...

Bosses won’t be able to force workers back to office AFTER July 19...

Boris Johnson ‘will reveal June 21 lockdown lifting will be delayed until JULY 19’...