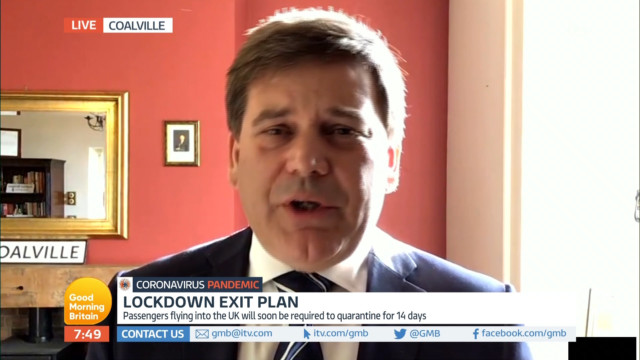 The telly host launched a furious tirade at the backbencher after the politician accused him of making a “diatribe against Boris Johnson”.

Returning after a week off due to a coronavirus scare, the controversial presenter asked if he was allowed to visit his two sons at a social distance.

Mr Bridgen replied: “As far as I would be concerned, I do not speak for the Government, as long as you maintain social distancing in what you do.”

The answer prompted an angry response from Piers, who claimed it was “completely against the new rules”.

He said: “You are a Conservative Member of Parliament, who thinks you know exactly what Boris Johnson has been saying, and you just told me to do something I’m not allowed to do.

“So this is the problem isn’t it? There is no clarity.

“It’s a load of flannel, talking about controlling the virus, you as a leading high profile conservative politician haven’t got a clue about what these rules, actually mean, and you’re an MP. You’re part of this.”

The firebrand host also labelled the Government’s handling of the crisis a “disgrace”.

He said: “We’ve had no PPE the NHS frontline workers account workers, that’s why 200 of them have died. It’s an absolute national disgrace.

“And when you come up and say, ‘I heard your diatribe against Boris Johnson’.

In a video message yesterday evening, the PM:

Boris told the country of his plans to return to a new normal: “We have been through the initial peak – but it is coming down the mountain that is often more dangerous.

“We have a route, and we have a plan, and everyone in government has the all-consuming pressure and challenge to save lives, restore livelihoods and gradually restore the freedoms that we need.

“But in the end, this is a plan that everyone must make work.”

Did you miss our previous article…
https://www.hellofaread.com/politics/people-flying-from-france-to-the-uk-will-not-have-to-be-quarantined/

Queer Eye’s Jonathan Van Ness posts gif of himself in tears over the Queen’s...

I’m A Celebrity’s Kadeena Cox breaks down in tears and screams ‘get me out...