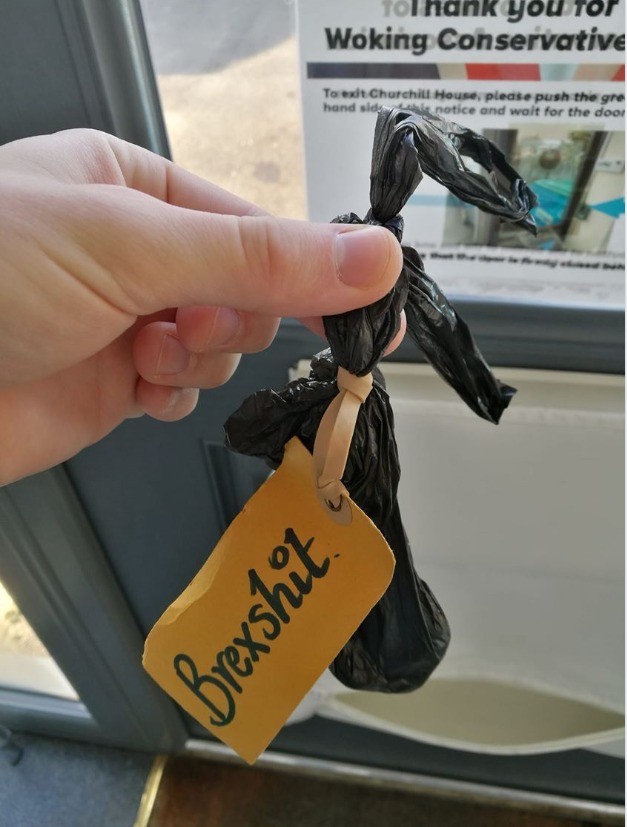 A disgusted staffer found the package in the post bag of the Conservatives Woking branch this morning.

The bag was found this morning by staffer Allrik Birch.

He told HOAR he was disgusted but slightly amused by the vile prank.

I went to grab the post from the bag and discovered what appeared to be a bag of dog poo inside.

Its a bit sad that someone thought this was necessary.

Thankfully its just a small number of individuals doing such things.

The local MP for Woking, Jonathan Lord, has long been supportive of leaving the EU, and voted for Brexit in the 2016 referendum.

Mr Lord said: “It’s very disappointing this has happened now – even now we have left the European union.”

“I just want my staff to feel safe and be free from threats and anti-social behaviour.”

He added: “Now is the time to come together and unite – seeking great trade deals with our partners in the EU and around the world.”

Sadly its not the first time such incidents have taken place at the branch.

The package has now been reported to the police.

Cllr Melanie Whiteland, the Chairman of the Woking branch and a local councillor, told HOAR: Its very sad. Why would anyone want to do this?

This nastiness is still happening despite Brexit being delivered.

When will they finally give up?

The team is not hopeful of discovering the culprit, as the building does not have CCTV in place yet and it appeared to have been hand-delivered.

Prince Andrew could be forced to give evidence in British court as hes accused...