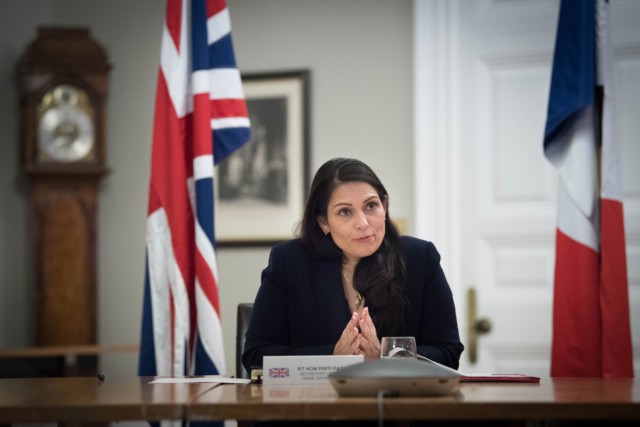 PRITI Patel is drawing up new laws to stop protests which blockade Parliament, courts and newspapers.

The fresh legislation would mean it is illegal for protesters to prevent access in or out of critical parts of Britain’s democracy after Extinction Rebellion protesters stopped newspapers being delivered earlier this year. The Home Secretary will introduce the laws, set to be included in the police powers bill, to protect democratic institutions in the UK.

It would protect the courts, the distribution of newspapers or broadcast media.

There could also be restrictions on where protests could be held, including banning them from critical national infrastructure, according to The Telegraph.

A Government source said: “It is not about banning protests. It is ensuring that people can protest in a free and fair way without stopping people from going about their lives or blocking democratic functions from happening.”

“Look at Extinction Rebellion where they shut down the whole of the city or prevented newspapers from publishing. People would not say that’s a lawful protest.”

Eco-warriors brought London to a standstill multiple times this year, with one scaling scaffolding over Big Ben during the demonstrations.

The protests were organised despite newspapers campaigning and highlighting climate change for years.

The eco-group said its aim was to “maintain the block and prevent these papers reaching newsstands” in a bid to “take on the titans of the media industry.”

But the tactics were blasted by Boris Johnson as “completely unacceptable”.

The Speaker of the House Sir Lindsay Hoyle is said to have been alarmed by protesters’ ability to breach Westminster’s security, and has requested a review of Parliament’s security procedures.

Sir Lindsay has made clear he does not want to prevent people from protesting – but does want to keep MPs safe from abuse.

Sources said Sir Lindsay wanted to make it illegal for activists to block the gates to Parliament and set up a “buffer zone” around the entrances.

Ministers have acknowledge that any attempt to curb protests would be controversial, but believe limiting protests that “has a disproportionate impact” on people and threatens democracy would gain public support.

A source said: “The protest (at the printing press) had the same effect as if they had broken into the plants yet not the same consequences. That is why a new law is needed.”

Did you miss our previous article…
https://www.hellofaread.com/politics/families-urged-to-cancel-their-christmas-celebrations-as-covid-cases-spike-again-in-wales/

Nigel Farage told by biggest donor he has 48 hours to save Brexit by...

River Island Cyber Monday Deals 2019: what to look out for