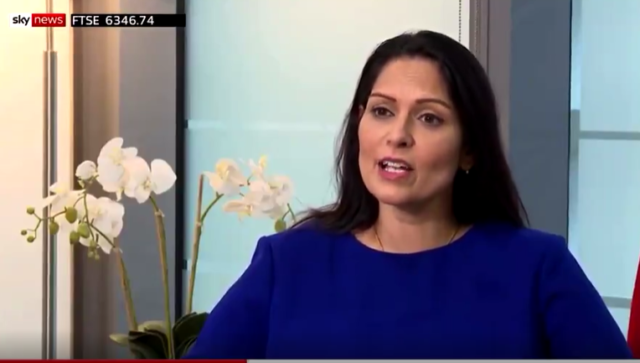 PRITI Patel suffered “racism and misogyny” at the Home Office that was the “worst of her career”, it has been claimed.

The allegation comes after the Home Secretary issued a grovelling apology over the findings of a bullying probe.

But she has privately told friends that the Home Office is the most hostile environment she has ever worked in, the Sunday Times reports.

A source close to her said: “Priti has worked in the private sector in FTSE 100 companies but the racism and misogyny she has endured at the Home Office has been the worst of her career.”

Another source had witnessed inappropriate behaviour directed at her.

“She has experienced things would not have experienced had she not been a woman of colour,” they said.

“She doesn’t conform to peoples’ opinion of her. There is this type in the civil service which is woke and leftie.

“Priti is the absolute opposite of that, which inevitably leads to tensions.”

The report found that while there was no behaviour which amounted to outright bullying, staff felt that they had been subject to unnecessary behaviour from Ms Patel.

In the wake of its findings, Ms Patel said in a statement: “I am sorry that my behaviour in the past has upset people.

“It has never been my intention to cause upset to anyone.” She also said in an pooled clip yesterday evening: “I work with thousands of brilliant civil servants every single day and we work together, day in, day out to deliver on the agenda of this Government.

“I am absolutely sorry for anyone that I have upset.”

In the wake of the report, Boris Johnson has ordered his MPs to defend “The Prittster”.

The Prime Minister said the accusations that she shouted at staff fell down because the investigation said she was “legitimately frustrated” at the poor performance of Civil Servants.

Mr Johnson’s decision prompted long term Whitehall anti-bad behaviour boss Sir Alex Allan – who had conducted the inquiry – to resign after his finding that Ms Patel’s behaviour could be seen as bullying was ignored.

Strict rules for ministers outlaw bullying and say staff must be treated with courtesy and respect at all times, and his report found Ms Patel had: “not consistently met the high standards required.” Mr Johnson said today he “has full confidence in the Home Secretary and considers this matter now closed”.

The PM said today he “will not tolerate bullying” but did not believe Ms Patel’s actions was guilty of it.

Ms Stratton added: “He does take this issue extremely seriously – the Home Secretary’s behaviour needs to be seen in context.

“And he says there was no evidence she was aware of her behaviour at the time.”

Ministers are normally expected to resign if they break the code and there are no known cases of a minister staying in post following a breach.

Sir Alex Allen said in the report: “My advice is that the Home Secretary has not consistently met the high standards required by the Ministerial Code of treating her civil servants with consideration and respect.”

He added that Ms Patel “approach” had “amounted to behaviour that can be described as bullying in terms of the impact felt by individuals”.

Although the report acknowledged Ms Patel may have been unaware of how her staff felt her behaviour “still amounted to a breach of the Ministerial Code, even if unintentionally.”

Sir Alex pointed the finger at the civil service as well, blasting them for being inflexible.

He said: “The Civil Service itself needs to reflect on its role during this period.

“The Home Office was not as flexible as it could have been in responding to the Home Secretary’s requests and direction.”

Ms Patel was not backed up by her own staff and no one who felt victimised by the Home Secretary raised the complaints with her, Sir Alex added.

The full report detailing evidence of staff complaints against Ms Patel is not expected to be released in full. Sir Alex resigned after the PM let the Home Secretary off with a slap on the wrist.

He said in a statement: “It is for the PM to make a judgement on whether actions by a Minister amount to a breach of the Ministerial Code.

“But I feel that it is right that I should now resign from my position as the Prime Minister’s independent adviser on the Code.”

As the civil service was thrown into uproar Chairman of the Committee on Standards in Public Life Lord Evans of Weardale said his committee would look “urgently” at what had happened as part of its review of the ministerial code following Sir Alex’s resignation.

Home Office permanent secretary Matthew Rycroft said the report made “difficult reading” but added the relationship between officials and ministers had “improved considerably.”

Former Treasury official Nick Macpherson piled into the fray, saying “bullying at work is never justified” following the revelations Ms Patel was let off because it was “unintentional”.

He added: “Things have to be very bad indeed for a Cabinet Office enquiry to find fault in a minister -the system is rigged to conclude the contrary.”

Sir Philip claimed he was subject to a “vicious” campaign against him.

A spokesperson for No10 said: “The PM is reassured the Home Secretary is sorry for inadvertently upsetting those with whom she was working with but ultimately as the arbiter of the ministerial code, weighing up all the factors, the PM doesn’t believe there is a breach.”

Tory MP Andrea Leadsom, the former Business Secretary, rushed to the Home Secretary’s side, saying: “I have known @pritipatel for many years as a friend and colleague.

“Yes, she’s strong and forthright in her views which is one of her great assets.

Ms Leadsom added: “I have never seen her bully anyone. She is also empathetic and incredibly kind.”

Ex-Tory leader Sir Iain Duncan Smith leapt to Ms Patel’s defence, saying she “is strong willed and determined to get the job done.”

The grandee added: “There is a history of poor civil service leadership at the Home Office and the report is critical of that.

“She is no bully but a good minister.”

He said: “Yet again, the Prime Minister has been found wanting when his leadership has been tested. If I were Prime Minister, the Home Secretary would have been removed from her job.

“It is hard to imagine another workplace in the UK where this behaviour would be condoned by those at the top.

“The Government should be setting an example. Instead, it is one rule for Boris Johnson and his friends, another for everyone else.”

“Yet when one of his own ministers is found to have bullied their staff he ignores the damning report sat on his desk and instead protects them.”

Two PS5 hacks that make your console MUCH better revealed

Boris Johnson will vow to bring back nurses bursaries and tax tech giants during...