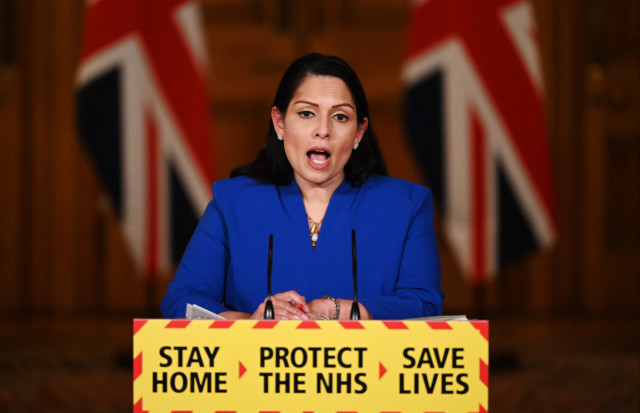 PRITI Patel will give a No10 press conference at 5pm today – where she will put Brits on their final warning to follow lockdown rules or face a tougher crackdown.

It comes after a worrying study last night showed the start of the lockdown has failed to drive down cases like before. Cops could crack down even harder on Brits breaking rules

The React study by Imperial College London carried out swab tests on 142,900 volunteers between January 6 and 15.

The Home Secretary will beg Brits to follow the rules and may threaten even tougher action if the numbers don’t start to come down.

Ministers are doing regular press conferences to keep the public updating during the third national lockdown – which is due to last until at least the middle of February.

Earlier this week the Home Secretary said it was a “long way” until restrictions can start to be lifted.

She will be accompanied by Martin Hewitt, Chair of the National Police Chiefs’ Council, and Dr Vin Diwakar, NHS England regional medical director for London.

The concerning new study shows around one in 63 people now have the virus across England – up 50 per cent on the last report in December.

London was the worst hit area with one in 36 residents of the capital infected with Covid.

Worryingly, it shows cases did not drop over the ten day survey – unlike the start of the previous two lockdowns.

Scientists think the new, more contagious mutation may be to blame, and warn infections may not fall unless we do more.

Lead researcher Professor Paul Elliott, from Imperial College London, said: “Our data are showing worrying suggestions of a recent uptick in infections which we will continue to monitor closely.

“Infections must be brought down; if prevalence continues at the high rate we are seeing then hospitals will continue to be put under immense pressure, and more and more lives will be lost.”

However, this morning Gavin Williamson insisted that the pressure on the NHS is being seen.

He told Sky News today: “The evidence that we’ve been seeing is that it’s actually, it has been having an impact in terms of relieving some of that pressure on the NHS.”

Ministers were said to be mulling tougher rules earlier this month – which could include banning people meeting up for exercise, closing nurseries or halting non-essential click and collect services.

It’s unclear whether a new crackdown will be on the cards as the death numbers and case figures still remain stubbornly high.

The new variant – which spreads more easily – is largely to blame.

But ministers also fear the lockdown rules are not being obeyed as strictly as the other shutdowns. Red Wall MPs appear in video telling PM how they could use HS2 funds...