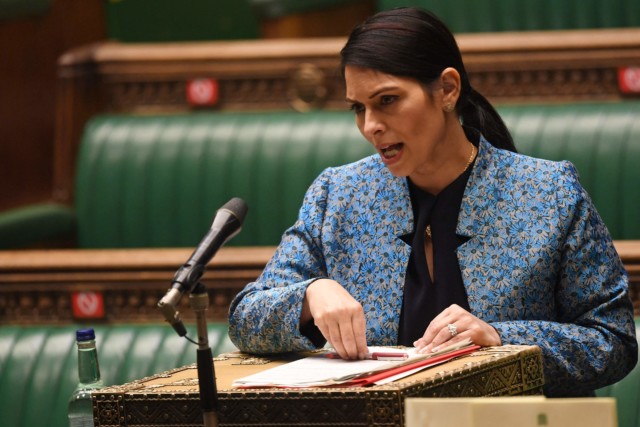 PRITI Patel is to help the needy flee war zones with safe passage to the UK in a bid to slash the lure of people smugglers.

But her plans to rip up parts of the Modern Slavery Act which is exploited by criminals sets government on warpath with ex-PM Theresa May.

After the success of the “path to citizenship” for Hong Kongers fleeing the Chinese regime, the Home Secretary will set up the new legal pathways to try stem the tide of illegal crossings over the channel.

Ms Patel will outline the “firm but fair” package next week which will make sure vulnerable asylum seekers aren’t jumped by economic migrants.

The Modern Slavery Act can be used by terrorists and those being deported to stay in the UK will be tweaked to stop people taking advantage of it.

The Home Sec will outline the “firm but fair” package next week which will make sure vulnerable asylum seekers aren’t jumped by economic migrants.

Genuine refugees will be able to come to the UK through agencies working in war zones and volatile areas of the world.

A Whitehall said: “We’re committed to setting up safe legal routes, which will be fair, and will ensure those under oppression, persecution and tyranny to come to UK.” Home Office insiders said they will not commit to a certain number of asylum seekers coming each year.

The source added: “This has to be be based on need, so we can take in an appropriate amount of people, and not based on numbers plucked out of thin air.”

It emerged that 80 per cent of illegal immigrants being booted out of Britain were handed a last minute ‘stay of execution’, according to Home Office stats.

Figures show that in October last year officials tried to remove 304 people on charter flights but only 69 were actually deported.

He said: “We know the immigration and asylum system needs reform, and figures like these only reinforce the need for an overhaul.

“Nearly 80 per cent of those due to be removed avoided it in this instance – This simply isn’t right.

“We will reform our immigration system and clamp down on those who choose to abuse the system.”

Did you miss our previous article…
https://www.hellofaread.com/politics/boris-johnson-plots-clampdown-on-iran-to-stop-it-building-a-nuke/

Meghan Markle ‘knew Kate Middleton was “powerless to fight back” after claiming Duchess made...

Brits told NOT to travel to Majorca, Ibiza and the Canary Islands in sweeping...

How to get a refund if you’ve got a holiday booked to Croatia or...