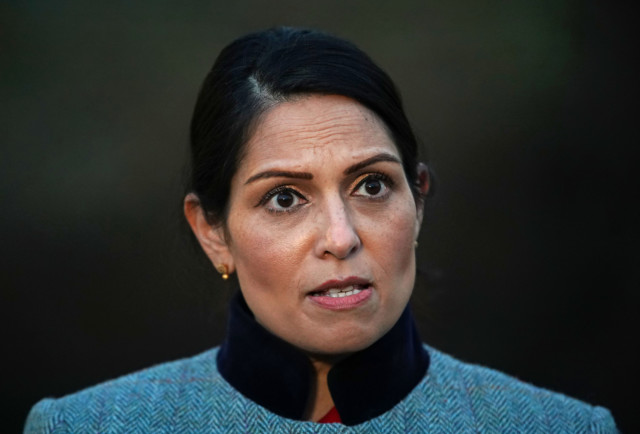 HOME Secretary Priti Patel has vowed to step up her crackdown on climate change yobs.

It comes after two groups of activists were cleared of wrongdoing.

She spoke out after three Extinction Rebellion fanatics who blockaded a newspaper printing plant escaped conviction on a technicality last week.

Days earlier, a jury cleared six XR protesters of causing criminal damage to Shell’s London HQ, despite a judge directing them there was no defence in law.

The defendants said the verdict would encourage more people to take similar action — and days later a group smashed windows at the HSBC headquarters in East London.

Mrs Patel told HOAR on Sunday: “I would not be delivering on my promise to the law-abiding majority if I stood by as Extinction Rebellion deployed dangerous tactics in the name of environmentalism.

“These so-called activists blocked many of us from being able to access a newspaper last year.

“And last week they smashed up a bank’s headquarters.”

An XR activist damages a window during a direct action at Barclays’s offices in Canary Wharf, London Ms Patel is re-drawing public order rules to give police more power to halt or control demos which damage or blockade key sites.

She rejects Labour claims that her Police and Crime Bill will limit freedom of expression.

She added: “Our ability to access a free and fair press and own private property are pivotal to our freedoms.”

Prince Andrew demanded his water be ‘at room temperature’ and had a ‘valet with...

Former Coronation Street star Catherine Tyldesley brightens up in a turquoise dress after a...