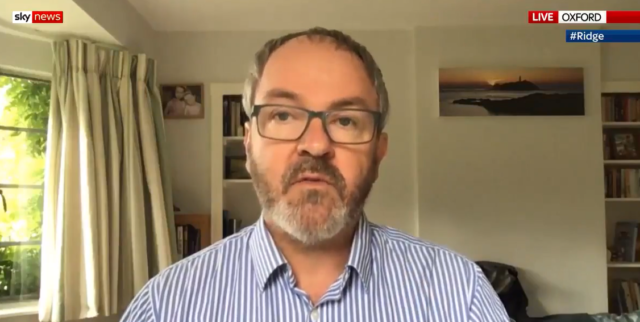 PROFESSORS and publicans have written to Boris Johnson to beg him not to announce a second lockdown.

Dozens of top medics, scientists, economists and public health experts urged him to change the Government’s strategy for fighting Covid-19. They want him to ditch blanket lockdown measures and instead target measures at the most vulnerable from Covid.

It comes as speculation grew that the PM would introduce more measures across the nation from tomorrow.

But the boffins warn him that imposing fresh nationwide measures risks imposing “significant harm across all age groups, which likely offsets any benefits”.

The letter, signed by 32 leading scientists, medics and academics, calls on the Government to “step back” and “fundamentally reconsider the path forward.

It came as Tory MPs spoke out against sweeping coronavirus laws too, and accused the Government of treating the nation like children.

The scientists’ intervention – led by the head of the Oxford Centre for Evidence Based Medicine Professor Carl Heneghan – comes amid fears the PM will announce sweeping new restrictions for England tomorrow.

This morning the Government’s top medic and chief scientific adviser delivered a televised address saying the UK is at a “critical point” and Britain is on course to hit 50,000 new Covid cases a day by next month.

Urging the PM to change his Covid strategy, they wrote: “In summary, our view is that the existing policy path is inconsistent with the known risk-profile of COVID-19 and should be reconsidered.

“The unstated objective currently appears to be one of suppression of the virus, until such a time that a vaccine can be deployed.

“This objective is increasingly unfeasible (notwithstanding our more specific concerns regarding existing policies) and is leading to significant harm across all age groups, which likely offsets any benefits.

“Instead, more targeted measures that protect the most vulnerable from COVID, whilst not adversely impacting those not at risk, are more supportable. Given the high proportion of COVID deaths in care homes, these should be a priority.

“Such targeted measures should be explored as a matter of urgency, as the logical cornerstone of our future strategy.”

He said ministers had “got into the habit of ruling by decree”, adding: “The British people are not used to being treated like children.”

The Government has faced resistance from the new ‘rule of six’ too – with MPs urging the PM not to include children.

Today the PM also faces a fresh warning from more than 100 pub landlords who have written to him warning that the country will lose thousands of pubs forever if he imposes further restrictions on the industry.

They warn that many pubs are “already on the edge and could not survive any further restrictions to trade”.

The letter warns: “The reality is that any decision to impose further restrictions on pubs threatens the livelihoods of thousands of people.

“It risks the failure of many pub businesses and the permanent closure of thousands of pubs, irrevocably changing the face of this country, its villages, towns and cities.

“A key part of our culture, and an institution that is known and loved all round the world, namely the great British pub, is now under grave threat.

“For those of us who rent our pubs, we need the Government to step in and finally, once and for all, stop pubs and commercial landlords from charging exploitative rents which bear no relation to the reality of trading under the current Government imposed restrictions.” The news comes after it was reported over the weekend that cases of the virus were up by 3,899.

At the weekend Prof Heneghan said there was “no evidence” of a second wave and said the government was only considering a “narrow range of views”.

He said the best time to impose further restrictions would be over the Christmas period.

The Oxford academic told Sky News: “Often when we come back in January, there’s a significant rise in deaths – about 5,000 per week more than what we see right now. And that’s due to the seasonal effect.”